The Charts: Football Manager Straight to the Top 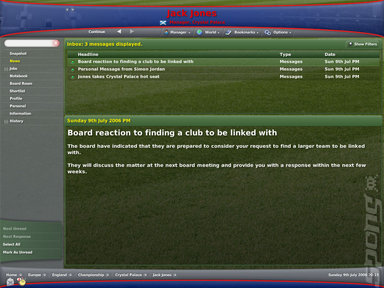 You're the tops!
All Images (8) »
Football continues to rule the videogames? chart this week, with SEGA/Sports Interactive's superlative soccer management sim, Football Manager 2007straight in at the top spot in this week?s UK All Formats Charts, with EA?s FIFA 07 relegated to number two.

You can read SPOnG?s initial review of the daddy of management sims here. As an aside, Islington?s Sports Interactive can now claim the Top three fastest-selling PC games in the UK ever with ?Championship Manager 4? at No:1, ?Football Manager 2006? at No:2 and now ?Football Manager 2007? at No:3. Nice one, Miles and Co, and keep up the good work with Football Manager 2008, but for now you deserve a well-earned pint!

Eidos? rival management sim Championship Manager 2007 also slips one place from number nine to ten this week, so it?s fairly clear which of the management games is feeling the love of the UK?s football fans this season.

Pro Evolution Soccer 6 launches in the UK this Friday, so it?s probably a wise move to go to your local turf accountants and put a large amount of money on that title tickling the top end of the chart next Tuesday.

Back up to the top five, EA readies its attack to ?own? Christmas yet again, with the release of The Sims 2: Pets, which goes straight in at number three this week.

Sneaking straight in at number five this week is Ubisoft's Tom Clancy's Splinter Cell: Double Agent which is currently being evaluated by SPOnG?s surveillance specialists who will be delivering their learned opinions on the latest in this ever-popular franchise over the coming week.

The only other new entry is THQ?s rather tasty Destroy All Humans! 2 at number twenty-one, which must be a disappointment for the publisher, and is perhaps yet another unfortunate sign that quality and originality don?t always win out over hardcore, high-budget marketing and well-known brands.

Still, read SPOnG?s review of Destroy All Humans! 2 and go out and buy it, as it deserves to sell much more than it has in its debut week on the shelves.