Terror. Doom. Disaster. Download it all for free inside. 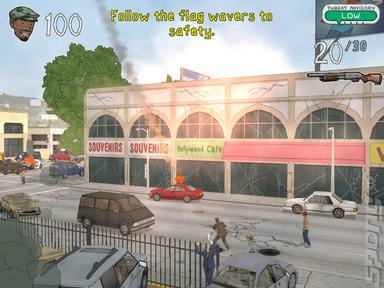 All Images (7) »
SPOnG is glad to bring you the just-released, totally free PC demo of American McGee's Bad Day LA, which features Santa Monica being totalled by some biological outrage or other.

Sounds like the time SPOnG went to E3 and stayed in that dodgy motel near the pier. Ever since, we?ve been trying to forget about the biological outrage in the pool which was situated conveniently ten metres from the freeway.

Click here to get the 260MB demo of Bad Day in LA. (Sorry, the demo is no longer available)

American McGee's Bad Day LA is out for PC and Xbox later this year. SPOnG wishes Mr McGee would get out of the habit of naming all of the games he makes after himself, as it just sounds wrong.

However, we?ll let it slide this time, as this game looks genuinely interesting and, dare we say it, a funny take on America and the West?s current obsession with doom, gloom, Armageddon and terror threats.

Commenting on the next gen war, McGee also told our pals over on CVG earlier this week that: "The only truly next-gen console out there is the Wii. Everything else is just a video card and processor upgrade?. I sense that Nintendo is going to capture the hearts of gamers while Microsoft and Sony stab each other in the neck for market domination. Nintendo is focused on innovation and games. The other guys are focused on making money."

What do you reckon? Does he speak a harsh truth? Let us know in the forum.
Games: American McGee Presents Bad Day L.A.