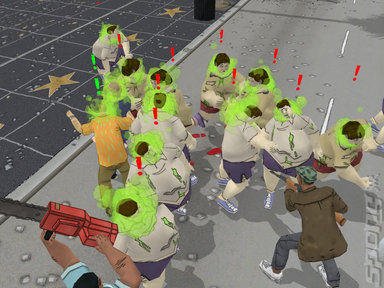 All Images (6) »
It?s been a while since we?ve heard or seen anything on American McGee?s PC title, Bad Day: LA, but we have to admit to liking the sound of the concept behind the game when it was first announced last year. Mainly because it sounded genuinely funny and innovative and seemed to be trying to break new ground.

The game is a ?spoof disaster? third-person action game, which pokes some much-needed fun at the ?culture of fear? prevalent in contemporary America. Perhaps, one might argue, a culture which is most apparent in the ghetto-tastic streets and terrorism-obsessed homes, bars and restaurants of Los Angeles.

Whatever. Before we start to seem to be clambering up the all-too-common British moral high ground - that familiar plateau where we all laugh at how stupid ?all those Americans? are for (a) voting for Bush and (b) not having passports and (c) not getting irony, let's also consider that contemporary America is also a culture with a rich history of poking fun at itself. Mainly through its as-yet-unparalleled cartoons (The Simpsons, South Park, King of the Hill etc.) and sitcoms parodying daily life in La La Land (the glorious Curb Your Enthusiasm springs immediately to mind).

So, with all this in mind, the storyline behind Bad Day LA sounds inspired ? LA experiences every unimaginable bad thing (terror attacks, natural disasters, meteor showers, zombies, the works?) all in one day, and you have a front row seat.

You play as the main character, ?a homeless man who abandoned his privileged life as a successful Hollywood agent after losing his self-respect?, and you can choose to save people or just waste them, as you see fit.

McGee himself describes the game thus: ?In simple terms, 'Bad Day LA' is every blockbuster disaster film funneled into one insane day as experienced from the perspective of the world's ultimate politically incorrect antihero."

SPOnG is very keen to see more on this, so we?ll be getting in touch with newcomers Lexicon Entertainment who are looking after the publishing duties in Europe. The PC version of the game is pencilled in for a Q4 2006 release (that?s winter to you).

Let's hope a Thompson called Jack keeps what hair he has left on his head.