Exclusive: Molyneux on Next Lionhead Title

Plus, his thoughts on Sony's bandwagon jumping 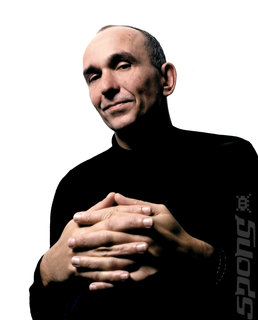 SPOnG recently had the pleasure of catching up with games development legend, Peter Molyneux, when we spent a rather pleasant day visiting him and his team at Lionhead's offices in Guildford.

Hmmm, that's one to ponder then. If anyone wants to hazard a guess about what news event from September 23rd last year might have inspired Molyneux to come up with an entirely new game concept, then guess away in the forums below.

When discussing his jettisoned 'Satellites' project, Peter was quite sure where it all went pear-shaped, telling us: "Yeah... That was an experiment that didn't work because we made a fatal mistake. And the fatal mistake we actually made was not becoming a publisher."

Next up, his thoughts on the Wii and on Nintendo's 'disruptive' strategy:

"...the genius of what they did was realise that consumers don't give an arse about how many bits and bobs and flips and flops and that malarkey consoles have. When we were at 32-bit and 64-bit, it was fine, but how many bits do we have now? What they care about is that they're going to get something that they haven't seen before. What they have done, brilliantly, is to say: 'Right, we're going to revolutionise not the box but what you hold,' and they've done that very well. I think Sony jumping on that bandwagon, quite blatantly, and not coming up with such a sexy message, is poor. I've played with the Wii and I still think it's a challenging name. You do get used to it, and they've made it unique. But I'm waiting for the Nintendo Poo and then they'd have the set."

We'll be bringing you some more highlights from the interview including the full low-down on Fable 2, (more of) Peter's thoughts on Sony and his new boss men at Microsoft and loads more, along with the full transcript early next week, so don't forget to check back then.

In the meantime, what actually did happen on September 23rd 2005. Come on! Help us out here. If anyone guesses correctly then we'll make Peter give you a big wad of cash. Or something.

sunkai 21 Jul 2006 14:27
6/15
Thinking about the game mechanics that Peter has traditionally used in his games, both events would fit:

Hurricanes: natural elements have had a hand in both the Black and White games and Fable. The use of next gen horsepower to simulate wind physics makes the concept viable.

FBI assassination: Meta level control of the FBI organisation to stem the tide of terror on US home soil would fit in to the God simulation category.

One thing is for sure: Peter is a hype generating spin daemon (in the nicest possible sense)


Didn't Cloning Clyde just do that?

Bentley 21 Jul 2006 16:52
8/15
I think it's surprisingly short-sighted for someone as wise and respected as Molyneux to accuse Sony of "jumping on the bandwagon". This implies that Sony have directly copied Nintendo with their [stupid] new controller, when in reality they both work in different ways, and will both be responsible for creating new and different ways to play games- although of course, there may be some crossover.

I'm not defending Sony's controller here, because I do think it's s**te (because of the idiotic lack of rumble) but I thought this whole "copying" thing had been sorted out. There is a massive difference between the concepts, and someone as intelligent as Molyneux should be aware of this, rather than blindly knocking Sony. In my opinion, it stinks of sucking up to his new friends at Microsoft without actually mentioning them. Which is quite clever, until I saw right through it.

I don't really care about what happened on that day last year any more. Nobody likes an arse-licker, apart from the arse-owner. But I will continue to play Black & White. Top game. The man is a genius. But now, he is a genius with a brown tongue.

realvictory 21 Jul 2006 17:00
9/15
Even so, Sony had plenty of time to think about their controller after Nintendo showed theirs, and they should have come up with a better way of presenting it to show that it wasn't just a copy.

The fact that they didn't is what makes it look like a blatant copy. Where's the examples and evidence to show why they think it's such a good method that they apparently invented themselves?

Little did he know...bam, along I come with a mind like some kind of sad historian. I can't normally remember what happened last night.

tyrion 22 Jul 2006 11:30
12/15
realvictory wrote:
Where's the examples and evidence to show why they think it's such a good method that they apparently invented themselves?
Well there is this patent from 1999 that shows that a Sony engineer had been working on motion sensing back then.

There is also a letter in MCV's May 26th edition from Daniel Boutros, ex of SCE, who claims to have seen "a Gyro controller which was basically a Dual Shock 1 design with a massive egg-shaped lump in the middle" while working for SCE development, nearly ten years ago.

There is this interview with Sony's Santa Monica Studios Game Director Brian Upton where he says "Actually, Incognito has secretly been working with Sony on the tilt technology for a while, but it wasn't until the last few weeks before E3 that they received a working controller" when asked about the "two weeks" that the Warhawk developers had to put the motion sensing into their demo.

Admittedly, that last one could be spin, but the first two are more weighty in showing that Sony has been working on motion sensing for at least seven years, maybe longer.

So, if it is Katrina, he doesn't know his dates very well.

DoctorDee 22 Jul 2006 15:16
14/15
Bentley wrote:
I'm not defending Sony's controller here, because I do think it's s**te (because of the idiotic lack of rumble) but I thought this whole "copying" thing had been sorted out.

Certainly one copying thing has been sorted out. Sony copied Emersion and got caught.

That's why there's no rumble.

But even if Sony had been working on a tilt controller since "10 yeards ago" or 1999, they certainly didn't announce anything about including it in PS3 until AFTER The Wii was announced. And personally, I don't believe Sony would have taken 10/7 years to build something like that if they were determined to get it out.

The concept/technology is not a copy, but the decision to put it into their next console defeinitely is.

ozfunghi 23 Jul 2006 00:28
15/15
Nintendo had been working on/with tiltsensitive controllers way longer, and had even implemented the technology in a Gameboy Color game nearly a decade ago.

The Warhawk team got less than 2 weeks before E3 to implement the tilt feature into their game.

So everyone stupid enough to believe Sony's PR bullshit deserves to get kicked in the face.
Posting of new comments is now locked for this page.