"All you need is inspiration", declares the Rez man. 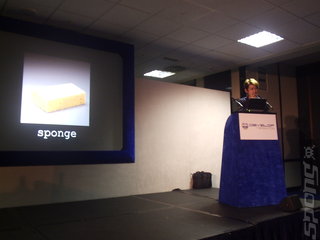 All Images (2) »
The games industry needs its dreamers. They are all too few and far between in these dark days of heavily-licensed, marketing-led, next generation videogame design. Thankfully, for gamers everywhere, Tetsuya Mizuguchi has a Triple-A brain that thinks differently from the rest of the herd.

Significantly different, as SPOnG found out when we attended his talk on "Creativity Led Production: How to bring new ideas into line" at the Develop Conference in sunny Brighton yesterday, where the Rez man shared his thoughts on games design, sponges (see pic, right) and why people have stopped chewing gum.

Mizuguchi spoke about past, current and forthcoming titles, including Sega Rally, Rez, Space Channel 5, Meteos, Lumines II and his current project, PSP title Gunpey. He also revealed that we will be hearing about some of the major music talent that will be appearing in Lumines II at some point over the next week. SPOnG will keep you posted as soon as we hear more on this.

?I am also very interested in the network situation with PS3,? Miz stated, with a nod to Phil Harrison down the front in the audience and an appreciative sound from the assembled mass, which sounded a bit like a cross between a contented sigh and an excited ?ooooo?.

Harrison had introduced the talk as being from, "One of the very few in our industry who can truly be described as a creative visionary." SPOnG could not agree more. Which is not something we often say when referring to Phil Harrison these days.

After seeing a little bit on his next title, Gunpey - a continuation of Gumpei Yokoi's simple puzzle game for the ill-fated Wonderswan, where you have to connect lines from one side of the screen to the other to complete (named after the aforementioned father of the Gameboy (see more on that here) Miz went on to demonstrate to the mere mortals in the audience why he continues to break the mould in game development. Gaming, he told us, has been like a sponge for the last 30 years, absorbing influences from all aspects of high/low culture and technology.

"The deeper you look at people, the more they are the game? You can use influences from anywhere and create anything you like", he said. "There does not have to be any shape or format, all you need is inspiration," he continued.

Yes. This is what we were there for. To hear a true master of his art speak openly and bravely about what really matters. Not big budgets, not marketing over design, not an obsession with new technology over a focus on gameplay. One thing matters to Mizuguchi-san. Inspiration. From this, everything else follows.

Don?t lose hold of that first spark, is what he was telling the assembled developers hanging off his every word. Meteos, he revealed, was inspired by the multi-tasking culture in which we live, where we (thoughtlessly, automatically) will text a friend, whilsting watch TV news whilst holding a conversation with someone else.

Rez and Space Channel 5 were both derived from and inspired by Mizuguchi?s interests and responses to dance culture, the musical Stomp! (yes, really!), jazz, surreal art a la Wassily Kandinsky, and 1980s MTV.

Lumines came from the idea of the PSP as a 'visual Walkman', with Miz noting: ?I wanted to create the perfect game for such a system. It could not be racer or an RPG. It had to be a puzzle game with music".

When discussing the upcoming Ninety-Nine Nights for Xbox 360 (on which he was a producer) Mizuguchi told how the idea of seeing a story from different perspectives was inspired by media coverage of the Iraq War, as well as by the Japanese movie Rashoman, which shows a vicious crime as seen from numerous different points of view. "A deep part of being human, is the ability to see things from different perspectives", he told us.

Finally, when talking about what goes through his massive brain when thinking about new game concepts, Miz told us about why people have stopped chewing gum. Concerned gum making companies have commissioned research to find out why sales of chewing gum have dropped off significantly over the last few years. Eventually, it was discovered that it is mainly because people talk on their mobile phones more often, and as a result, do not want or need to chew gum.

?The point being?? SPOng was thinking as he was telling us this story. The point being this, as Miz cleverly outlined the reason for the gum analogy: "A game should fulfill a deep human need or want. Then it can be successful all over the world."

SPOnG tried to collar Miz in the corridor after the talk to ask him directly ? ?What is the score with Rez 2? Are you going to make it, or what? Make Sega make you make it!? However, luckily (for him) we were unable to find him. Plus, he?s probably getting bored of SPOnG asking him that old chestnut every time we see him.

Read our recent interview with the man himself here, and find out about Rez 2 and why Toshiro Nagoshi has turned orange.

For information on any of the games mentioned in this article, merely click through into SPOnG via the links right up at the top.

Svend Joscelyne 13 Jul 2006 13:44
1/1
Very enjoyable talk he made. I was shocked to find that the room wasn't as filled as I was expecting it to be for his lecture. I mean, it is Tetsuya Mizuguchi we're talking about.

Still. Game design like a sponge. What a legend.