Something small looming from Redmond 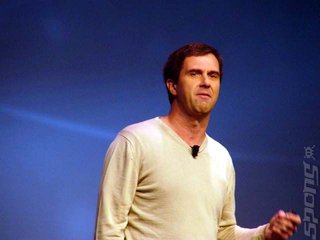 Bach. In a sweater.
It looks as though a portable Xbox of some-kind, likely a music player, is about to be announced by Microsoft, as reports leak out of the software firm secretly courting the music industry for support for an unspecified Xbox-related product.

In an article entitled, "Microsoft developing a rival to Apple's iPod" Reuters News claims: "Microsoft is developing a music and video device to compete with Apple's iPod and creating its own music service to rival Apple's iTunes," concreting gossip from the music sector that the man who is now accountable for the performance of Xbox and entertainment devices, Robbie Bach, was on a candy-run to gather backers for a music delivery project.

Reuters made no mention of its sources, though SPOnG assumes that the music industry, famed for its inability to keep anything whatsoever a secret, simply queued up to blab Microsoft's plans.

As to whether this pre-planning points towards a portable Xbox is unknown, though Microsoft did shy away from claims it was planning a PSP rival earlier this year. Live is the obvious delivery platform for mTunes, with the online service Microsoft swore blind on a ton of bibles would only ever be used for game-related data delivery expanding to target very much not-games-related content.

According to one Reuters source who may or may not be a Microsoft plant, "They have been developing technologies that have really good music discovery and community. iTunes is the 7-11 (of music stores). You don't hang out there," which sounds a little too soundbite to be a genuine quote...

To date, various sources have mooted everything from a fully-equipped portable games player to a free 1GB solid-state drive offered to punters with sign-up to the mysterious service.

If it impacts on your gaming life, we'll tell you all about it. Click here to read how Fox News already confirmed a portable Xbox as being in development at Microsoft...

If there's an industry out there that isn't a MS-monopoly it will be soon!

Joji 20 Jun 2006 18:00
2/2
Good lord, are we at all surprised by this? MS want to own the world in a Scarface like way. If this goes ahead we could well see an alliance between Nintendo and Apple to combat this threat. Now that would be interesting indeed.

Sony and Nintendo have the market now but I don't know if I can afford another damn handheld. It's already bad enough to choose from three home consoles.

I'm sure an MS handheld would be nice but there's not enough kind of software to make me really wanna buy it over anything Nintendo, judging by Xbox/360. Then it might fall into that conversion trap PSP currenty suffers from.

As for rivalling Apple that would be one hell of a battle. I feel too many people like music though to be honest.