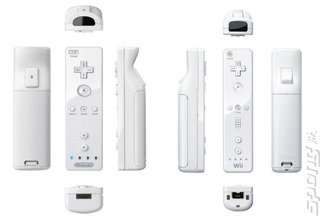 WiiMote Evolves...
Speaking to Electronic Gaming Monthly, Celebrity game designer and Nintendo frontman Shigeru Miyamoto shed some light on the evolution of the Wii controller, with specific reference to the inclusion of the WiiMote speaker and the decision not to include a microphone, functionality that until now was still mooted to be a final Nintendo hardware surprise.

"During the development of the controller, we heard from a lot of different people offering a lot of different ideas about what to add. And there were ideas about cameras and microphones and more, and we tried many of them out. But the sound teams in particular were very passionate about having a speaker in the controller that could make noise. You are probably familiar with Yoot Saito, who developed Seaman and recently Odama for the GameCube - he made mention that if it had a speaker you could have it ring like a phone...that sort of thing. And a lot of the development teams were excited about it, too. So after debating its cost and function, we decided to include it."

When asked why no microphone was included in the WiiMote, Miyamoto explained "Well, obviously there are questions of cost and technology. When you think about the type of microphone that would be easy for people to use for home play you think of a headset. And so the issue is, if you have a headset somehow attached to the controller, it gets complicated to use, and we wanted [everything to] be easy to use-simple and fun."

SPOnG will now happily join you in a big Nintendo fantasy group wank about one day owning one of the rejected WiiMote prototypes which includes a camera and microphone. If we all owned one, we could probably call each other using VOIP to congratulate ourselves and share pictures of our import Famicom collections. It would be teh aw3some!