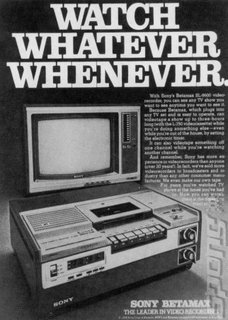 The war of words between Sony and Microsoft has peaked again, with European Xbox chief Neil Thompson savaging the PlayStation 3 as representing little more than a shiny new DVD player. In what is perhaps the most savage attack on the new Sony machine recorded to date, Thompson paints the rival console as little more than a new Betamax platform.

Speaking exclusively to SPOnG, he said, "I think [Sony] has missed the ball, in that it?s not really a next-generation games player ? it?s a next-generation DVD player. For us, that?s great news, because we think we make the next-generation games console." Thompson continues, "We?ve got the content to back that up, we?ve got Xbox Live to back that up, we?ve got price-points that are very compelling. If gamers are desperate to get the next-generation DVD player, then they?ll start considering Blu-Ray and the PS3. But Sony is the company that brought us Betamax, MiniDisc and UMD ? I?m not convinced people today will go and bet the farm on buying a Blu-Ray disc.?

Of course, assessing the relative successes of the formats is a somewhat deeper process than it appears. Betamax was a commercial flop, though it should have been the lead platform for home use, simply because it was better, smaller and much more capable than the VHS monster we were lumped with. SPOnG also doubts Sony is licking any deep wounds from MiniDisc. Although pre-recorded sales failed catastrophically, sales of players and recorders offered a healthy business to Sony's portable consumer electronics wing. To claim UMD is a failure is, of course, a biased statement, not reflective of the performance of the PSP-driving disc. Although pre-recorded movie sales failed, as most users quickly realised they could transfer content from their DVDs for watching on PSP, game sales have certainly not been hampered. The lack of software for the PSP has resulted in strong demand for everything coming available for Sony's budding platform.

tg0006 12 Jun 2006 21:30
1/9
I think microsofts xbox 360 launch proved how much some people will pay for consoles (ebay), their are some people who nomater what will buy a PS3 (me for one) so it definently wont fail. Also, as a psp owner, i can say my psp library has grown faster than any other game library ive ever built. i have 8 movie discs (including spiderman 2 bundled with it and family guy season 1-2 5 disc set) but i also have 11 games. If nothing else, the PS3 having the blu-ray will encourage people to upgrade to a hdtv and hd format. Also, i must comment about the xbox live comment. PS3 online says they have free online which is about $40 every year (including the 20 dollars off for new games) and after 6 years is around 200, so for online, the pricepoint gets much closer.

horngreen 12 Jun 2006 22:46
2/9
LOL I think Sony has this kind of talk coming to them. They talked smack about MS all last generation and MS played it cool. I would definately call UMD and minidisc a failure. Sonys portable music player business is nothing comapred to Apple and the Ipod. To me the next genration of films should be on flash memory and not some silly spinning disc. Hell CDs and DVDs are essentially like albums with a laser replacing the needle. Huge capacities on Blu Ray seem cool but what the hell will they put on there? You can't make a game 2,3 or 4 times as long and sell if for $50-60 bucks. Developement cost still exist and making a game 2-3 times longer will cost more and that will be past on to us. I'm sure the PS3 will sell out early but when they are still trying to sell them for $5-600 bucks a year or two later sales will drop.
more comments below our sponsor's message

then a news source. just saying.

then a news source. just saying.


It's called being objective and unbiased, mate. Looking at the story from both angles and all facts. It's what kinda seperates this from a pathetic fanboy "SoNY!? LOL!" blog.

Although having said that, UK Resistance gets all my love.

fluffstardx 13 Jun 2006 10:29
5/9
Not really. Betamax wasn't too much better (I've actually used one, which is odd), the Minidisc was a total flop (I own one, and love it, but I know it flopped), and UMD movies have proved unsuccessful. Of course games have proven successful - if they hadn't, neither would the PSP - but the films were the testbed for the format.

Blu-Ray will be interesting. If HD-DVD has the cheaper players, it's dead. If not, we have a war.

Hmm. I think you may be comparing it to a third or fourth gen VHS machine. At the time the two systems launched in the seventies Betamax kicked VHS' butt for picture quality, tape size and length.

Over time VHS caught up, but it took it over 10 years to get to where Beta was for picture quality, less for tape length of course.

the Minidisc was a total flop (I own one, and love it, but I know it flopped)

That's merely a case of your own cultural blinkers. Minidisc tanked in the UK, sure. But it was all over the place in Asia for most of the nineties. Only the emergence of the iPod rendered it redundent.

That's merely a case of your own cultural blinkers. Minidisc tanked in the UK, sure. But it was all over the place in Asia for most of the nineties. Only the emergence of the iPod rendered it redundent.

Really? I wondered why they only stopped selling over here last year.

I actually do prefer it over conventional HDD MP3 players. After all, the 1GB disc goes funny you can replace it... try doing THAT with an iPod.

This is all going to come down to cost, as usual. Is the 360's supposed <Ł130 HD-DVD drive an indicator of the price of such players in general, I wonder, and if so, how fast can the cost of Blu-Ray drop? Because, if one is such a significant amount cheaper, that one will win.

DoctorDee 13 Jun 2006 13:38
8/9
fluffstardx wrote:
Really? I wondered why they only stopped selling over here last year.

Well, they were selling, but by your own admission never in serious numbers. Some people needed on-the-move recording that lots of MP3 players don't offer - so I guess there'd still be a (small) market for them.

I actually do prefer it over conventional HDD MP3 players. After all, the 1GB disc goes funny you can replace it... try doing THAT with an iPod.

It's not that difficult. And even the smallest HD iPOd was 5Gb - I really can't be bothered with removable media players. I mean, I've had them all Walkmen, Portable CD, MiniDisc - and they always annoyed the s**t out of me. The iPod is just soooo simple - both the loading of music and the lack of removable media, and the associated hassle of storing it when it's not in the player.

This is all going to come down to cost, as usual.

I don't think that VHS/Beta DID come down to cost. It came down to software availability. The porn industry (and the hire shops) went with VHS, and Beta went down the plug. The idea that the PS3 is just a BluRay player is preposterous - thiugh it is what microsoft wants the public to think. It IS a BluRay player, and even at $600 it would be the cheapest one available (though that might not be the case by the time is comes out). But the BluRay aspect it purely peripheral. But the core of the PS3 will be its gaming capabilities. Either they will rock, or they won't... and then it will be down to the availability of software... Price, I think, will be a tertiary concern.

tyrion 14 Jun 2006 07:31
9/9
fluffstardx wrote:
Is the 360's supposed <Ł130 HD-DVD drive an indicator of the price of such players in general, I wonder, and if so, how fast can the cost of Blu-Ray drop? Because, if one is such a significant amount cheaper, that one will win.
The price of the 360 add-on HD-DVD player, when announced, will only be an indication of the cost of the drive mechanism its self.

The drive will be just that, and HD-DVD drive in an enclosure with a USB sub-system and a power supply. The 360 its self will take care of the decoding of video and audio and the subsequent output to the screen and speakers.

Think of it as an external USB DVD drive for a PC, it's essentially the same thing, just a different read mechanism. Standalone players will need to include decoding and output hardware, which will push the price up from the 360's add-on drive.