Lumines and being over-rated 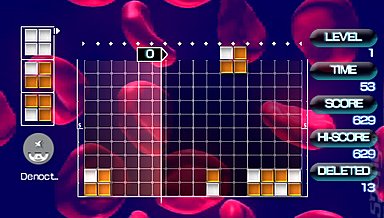 Lumines II
All Images (3) »
There's one thing you notice about Tetsuya Mizuguchi over and above everything else. He's sexy. Girls love him. They look at him in a daze, hang on his every word and he knows it. Guys love him too, but for an entirely different reason. He's cool. Dead cool. He looks like his brain is struggling to function in the normal world, wishing instead to be alone with his thoughts of space, music and wherever else Mizuguchi's brain goes to enjoy itself.

SPOnG's last encounter with the man famed for REZ and, more recently Lumines, was way back in 2003 during a rather interesting chat which included a slightly drunk, rather dishevelled Toshihiro Nagoshi. But more of that to come...

SPOnG. We wanted to talk to you about your time at Sega and what happened to United Game Artists. [Mizuguchi's studio before he departed to form Q Entertainment] Do you have any thoughts on what happened?

Tetsuya Mizuguchi: For some reason, after I left Sega, UGA disappeared. The people moved into Sonic Team... And that's that. I never belonged to Sonic Team. After I left, Yuji Naka was head of UGA and Sonic Team.

SPOnG: You must have heard that Yuji Naka has now left Sega...

SPOnG: You must get asked about REZ a lot. Do you feel the game is over-rated?

Mizuguchi: I don't know. I can't say. REZ was one of my favourites. I spent my love and my energy on REZ and it took a long time to create that sort of experience and it was very new at the time - to co-ordinate the sounds into the music. And it was this experience that really helped plan games such as Lumines and games in the future. REZ is my favourite game.

SPOnG: So after the commercial success of Lumines and Meteos, is there a way Q Entertainment will be able to licence the rights to REZ from Sega? Is the relationship good enough?

Mizuguchi: That's a 'no comment' [Laughs, as do several other Q? staff present.]

SPOnG: So have you been speaking about it?

SPOnG: Before Lumines launched, how nervous were you? It was Q's first game, a novel concept and it had to work...

Mizuguchi: I didn't feel nervous at the time because the PSP was new hardware. I was given the demonstration [by SCEI] of the PSP and they said to me that it was the new interactive video Walkman. So I thought about the kind of games we should make and the types of games people would want to play. We prepped for that. [Lumines] Is not a deep game like REZ. It was a very simple puzzle, with music and it was that kind of the image I had. It was a very small team, five or six at the time (we now have 35) so Lumines was made in a very natural and very good atmosphere. And after Lumines launched, I was so surprised because there were no original games for PSP and [the PSP hardware] saw a really good reaction from the market. We spoke to many publishers and most told me "There is no music game market, no puzzle game market." and told me there was no possibility [they would sign Lumines]. I never gave up. And now, after the release of Lumines, we see a very good reaction from the market and I'm so happy. It's really on-message to make that kind of game for PSP. It's a really good piece of hardware to make a music game as it's a completely unique environment, as users use earphones.

SPOnG: From which companies has Q Entertainment taken it's staff? You mentioned that since Lumines, you went from a small team to 35 or so...

Mizuguchi: They are mainly the core people from UGA. We've taken a few people from Koei, though we are working with Phantagram for Ninety Nine Nights. We took some artists from Koei to Q Entertainment.

SPOnG: How confident are you in the success of Lumines 2? And how did you end up in bed with Disney? [BVG is publishing Lumines 2]

Mizuguchi: [Laughs] This was not a creative decision. It was a marketing and business decision. BVG was really aggressive and very understanding about Lumines and it was a very good atmosphere with them. Shuji Utsumi [Q Entertainment CEO] was formerly with BGV before Q Entertainment, which is one of the reasons.

SPOnG: So tell us about the game. When does it launch and what's new?

Mizuguchi: It launches in Q4. We've put 100 new music tracks in Lumines 2 and we've added the ability to play around with music videos. We have tracks from famous artists with videos... So I'm like the party organiser - Lumines One was the image of the party from when the sun sets to the morning. Right now we are contacting many artists worldwide, so it's a great party, a great gig!

SPOnG: Who are you still in contact with at Sega?

Mizuguchi: Ah, Many people! Hisao Oguchi, the president of Sega, sometimes we have dinner or go out for lunch.

SPOnG: Are you friends with Toshihiro Nagoshi?

SPOnG: Have you noticed his images change?

SPOnG: We ask because the last time we met him was with you, at the VIP Sega evening. He was dressed normally, had kind of straggly hair, looked a bit hungover... We've seen him recently and he's really skinny and his skin colour is golden! The most incredible tan we've ever seen ever. Do you have any background on his image change?

Mizuguchi: I feel very, erm... negatively about this...

[Everyone now in hysterics]

SPOnG: Were you surprised?

Mizuguchi: Oh yeah! But, you know, he's a very good guy! But I told him, 'I think this is not good!". I think he knows. He made the Yakuza game, and he set his mind into the game.

Mizuguchi: Yes, I think so.

SPOnG: Have you been planning anything on the Wii?

Mizuguchi: No. We haven't even touched it yet. I'm thinking of it in the future though.

As of a week from this article going to press, Q Entertainment had still not had access to the Nintendo Wii, though given Nintendo's open invitation to developers to build their own peripherals for it, we imagine this situation will soon change.

A big thanks to Mizuguchi-san and all at BVG for taking time out of their busy lives to share thoughts on all things gaming with SPOnG.

The delicious Lumines 2 launches across the globe in Q4, which is between October and December to you and us.

Any info on when Lumines is coming out form live arcade?

I haven't played it for ages, but after reading that, I'm gonna break it out tonight and give it a blast...