Plus, more from the genius mind of Mizuguchi-san 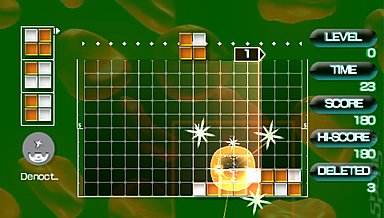 All Images (9) »
SPOnG was fortunate enough to catch up with Q Entertainment?s Tetsuya Mizuguchi (?the Rez man?) at E3 earlier this month. We?ll be telling you all about that little get together and about what Mizuguchi-san has planned for the future in our forthcoming exclusive.

In the meantime, Buena Vista Games has just sent us not one, but two trailers of their forthcoming PSP titles from Q Entertainment ? the follow up to the PSP?s crack-like addictive puzzler, Lumines and the unique-looking ?puzzle shooter? Every Extend Extra.

You can see both trailers by clicking on the links right here:

In Lumines II, as in its predecessor, you control squares made of four smaller block pieces that are dropped into the playing field one at a time to form same-color squares. A vertical ?timeline? (think Donkey Konga!) sweeps across the playing field from left to right and wipes the same-color squares from the playing field. The game ends when the unmatched blocks pile up to the top of the screen. The game features improved 3D backgrounds, improved graphics and streaming video in the background. Plus, each level has its own musical theme and its own sound effects, with plenty of top licensed tracks being promised. SPOnG will bring you more news on one of our most anticipated PSP titles for 2006 as soon as we get it.

Every Extend Extra, described as a ?puzzle shooter? is basically a fusion of arcade-style shmup, mixed in (as is Mizuguchi?s trademark) with eye-bleedingly intense music and visuals. It is, intriguingly, a shmup without any shooting. The key is to evade enemy attacks and then use perfect timing to blast the enemies on screen in a colorful display of explosive and melodious chain reactions. Again, more news on Every Extend Extra as we get it.

SPOnG is very glad to see Buena Vista Games catering for hardcore gamers. This new publishing deal with Q Entertainment is hopefully a sign of more, better games coming our way from the previously off-the-map gaming division of the Disney Empire.