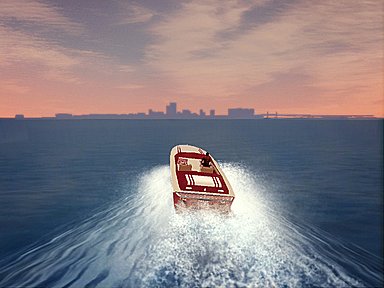 All Images (4) »
Vivendi has announced its E3 line-up earlier today, with a strong roster on show, including WoW expansion The Burning Crusade - which is bound to be a geek magnet in the South Hall later this week.

The company also announced the forthcoming coked-up Cuban gangster shooter, Scarface: The World is Yours. How and if they plan to represent the act and overall sensation of falling face-first into a mound of cocaine and then going on a suicidal killing spree ? as in the movie ? is yet to be confirmed.

Another big announcement for the company is fantasy movie tie-in, Eragon, which will be released for current-gen consoles, handhelds and the Xbox 360. The firm is pinning a lot of hopes on Eragon ? and what with the movie being billed as a Christmas replacement for Potter or Lord of The Rings ? you can see why.

World in Conflict is a PC real-time strategy set during the era of the cold war. Caesar IV is the latest iteration of the popular city builder. Vivendi will also be showing off recently acquired shooter Timeshift on PC and Xbox 360 ? which, interestingly, gives players ?the ability to slow, stop and reverse the flow of time for short periods to solve problems and take out enemies while remaining completely unaffected.?

From the Sierra Online label, there is also the online title FreeStyle Street Basketball. What is it with online versions of ?street? sports, first NCSoft?s Soccer Fury, now this. Whatever next?

Bruce Hack, CEO of Vivendi Games said of the line-up: "Vivendi Games has emerged as a leader in top quality interactive entertainment with the number one position in the MMORPG market, and leading positions in PC and console. We are thrilled to present a spectacular E3 roster of original properties and entertainment licenses, which reflect the creativity and innovation that are cornerstones of our work."

Well, that?s all well and good, but with creativity and innovation in mind, perhaps the less said about the PSP title 50 Cent: Bulletproof G Unit Edition the better (no more fifty pence jokes please, people - the Vivendi people they not down with this sh*t), along with Miami Vice as a PSP exclusive - a tie-in for the forthcoming Colin Farrell movie.

At least we?ll finally get to have a play on F.E.A.R. on Xbox 360, as well as checking out new PC expansion pack Extraction Point.

Here's that line up, in full:

F.E.A.R. 360
The best shooter of 2005 comes to the Xbox 360 with brand new single player and multiplayer content. F.E.A.R. is a paranormal action thriller presented entirely in first person. It is an unprecedented adrenaline rush of close quarters combat seamlessly melded with the spine-tingling, shocking intensity of the unknown. Developed by Day One Studios. Expected Release: Q4 2006; Platform: Xbox 360

Timeshift
Timeshift is a futuristic FPS that is all about controlling time. Using the Quantum Suit, players have the ability to slow, stop and reverse the flow of time for short periods to solve problems and take out enemies while remaining completely unaffected. Developed by Sabre Interactive. Expected Release: September 2006; Platform: Xbox 360, PC

Companies: Vivendi
Games: Eragon Scarface: The World is Yours World of Warcraft: The Burning Crusade