Expanding the world of portable entertainment with new peripherals, features and services. 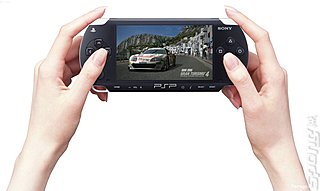 Base Model to Become Available in North America and Europe

Since its launch in Japan in December 2004, North America in March 2005, and in Europe in September, 2005, PSPÆ has already shipped more than 15 million units worldwide establishing its position as a new handheld entertainment platform around the world. With its overwhelming power, unparalleled in handheld systems, PSPÆ has gained huge support from a broad range of users.

To accelerate further penetration throughout the world, a new Base Model in black color will become available in Europe from March 22, 2006, and 199 Euro/199US$ respectively in North America end of March 2006. SCEI will also introduce Ceramic White for the base model of PSPÆ (PSP-1000 CW) at a recommended retail price of 19,800 yen excluding tax (20,790 yen including tax) for the Japanese market.

On the software side, a series of new PSPÆGame are expected to be released from third party developers, publishers and SCE Worldwide Studios (SCE WWS) * around the world.

Since its launch, PSPÆ platform has evolved continuously with system software updates* adding new and attractive features such as internet browsing, playback and storing of high quality video. SCEI will further continue to update the system software and expand the world of entertainment with PSPÆ. As a next step, SCEI will newly add MacromediaÆ FlashÆ player and extend RSS Channel function which enable users to playback and save internet radio content and entertainment movies.

As part of SCEIís passion to spread the entertainment world of PSPÆ. it has been introducing ìPlayStationÆ Spotî * in Japan since February 2006. SCEI has now more than 150 locations at train stations, complex cafÈ and games shops where PSPÆ users can easily enjoy various content such as trial game software for free of charge. SCEI will further extend its location base so that more PSPÆ users could have easier access to the ìPlayStationÆ Spotî.

For expanding the potential capability of PSPÆ hardware, new camera (PSP-300) and GPS receiver (PSP-290) will be introduced from this autumn. By adding these new attractive peripherals, new features such as motion tracking technology of Eye Toyô, developing the new game titles by utilizing the video chat function, portable navigating system with GPS function are highly expected.

SCEI aims to expand the world of entertainment with game, music and movies in the mobile entertainment arena by offering new peripherals and the continuous system software upgrades for the additional features on PSPÆ. With PlayStation, PlayStationÆ2 and PSPÆ, SCEI will create and develop a new world of computer entertainment through the fusion of game, music, movies and broadcasting.