Prince of Persia to Debut on the PSP? (PlayStation Portable) System

The Old Man said to the Prince, ?Your fate has been written. You will die.? 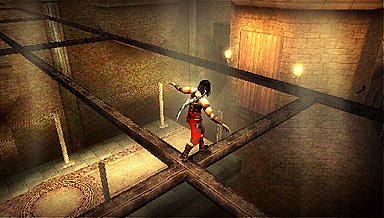 London, UNITED KINGDOM ? September 27, 2005 ? Today Ubisoft, one of the world?s largest videogame publishers, announced a Prince of Persia title in the works for the PSP? (PlayStation Portable) system. Developed by Pipeworks, the game builds on last year?s console success, Prince of Persia Warrior Within, and features original content such as additional puzzles, new maps and redesigned levels. The game is scheduled to ship December 2005.

Enter the dark underworld of Prince of Persia PSP (working title). Hunted by the Dahaka, an immortal incarnation of Fate seeking divine retribution, the Prince embarks upon a path of carnage and mystery to defy his preordained death. His journey leads to the infernal core of a cursed island stronghold harboring mankind?s greatest fears. Only through grim resolve, bitter defiance and the mastery of deadly new combat arts can the Prince rise to a new level of warriorship ? and emerge from this ultimate trial with his life.