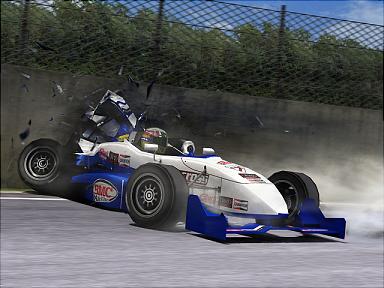 All Images (3) »
Organisers of Games Market Europe, the UK's only trade show for the computer and video games business, can today reveal that Codemasters will use the event to exclusively premiere a playable version of TOCA Race Driver 3.

The game, which is due for release in February 2006 on PC, PlayStation 2 and Xbox, takes the six-million selling series further than ever before. TOCA Race Driver 3 boasts the most individual motor sports ever seen in a single game and includes over 100 individual championships covering 35 different racing disciplines such as GT, Off Road, Touring Cars, Historic, Open Wheel, Rally and Oval racing.

"This is fantastic news for the event and its attendees," says Andy Lane, event director, Games Market Europe. "The TOCA series is one of the industry's most popular franchises, and to have it debut at Games Market Europe is a real endorsement of what we're aiming to achieve. Now we're starting to reveal specific details of what's appearing at Games Market Europe, people can see it's shaping up to be a hell of a first show."

Codemasters has also confirmed that its PSP launch titles Colin McRae Rally 2005 Plus and TOCA Race Driver 2 will also be on display, along with playable versions of Heroes of the Pacific (PS2, Xbox, PC) and LMA Manager 2006 (PS2, Xbox).

"Games Market Europe is the perfect place to showcase our line-up for the rest of this year and give the trade an exclusive reveal with TOCA Race Driver 3," says Richard Eddy, Codemasters' Head of Communications.