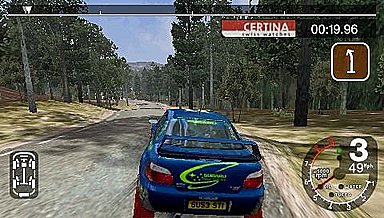 All Images (6) »
Set to rev the PSP's engine to the limit - Colin McRae Rally 2005 Plus and TOCA Race Driver 2, Codemasters' best-selling motorsport titles, are both ready to race as the PSP launches in Europe on September 1st.

Whether you want to race on some of the world's most famous circuits in TOCA Race Driver 2, or take it off-road in the mud-splatteringly stunning Colin McRae Rally 2005 Plus, both titles deliver perfect portable racing and come complete with Wireless multiplayer action.

Colin McRae Rally 2005 Plus puts world-class rally driving right in the palm of your hand. Get everything on your PSP: the sensation of danger, the demanding conditions of the track, the unpredictability of the elements, the full adrenaline rush!

Colin McRae Rally 2005's rally stages give different sized chunks of playing time - perfect for gaming on the go. You can pick up and play a 3-minute stage or go in for a full 3-hour championship! When you want to get competitive, there's Wireless multiplayer racing for up to 8 players simultaneously. You can even share your best replays over Wireless or send a demo of the game to your PSP-owning mates.

On PSP, TOCA Race Driver 2 packs in all the high-performance race cars, circuits and championships from the smash-hit PlayStation 2 edition and adds Wireless multiplayer action play for up to a staggering 12 players simultaneously.

With over 30 championships spanning the globe, from Chicago to Europe, and South Africa to Australia, you'll be tearing up the tarmac on 52 circuits, including Laguna Seca, Hockenheim, Surfers' Paradise, Brands Hatch, Pikes Peak Motor Speedway and Kyalami. The competition's fierce out on the circuits, especially when - even on PSP - you have up to 21 cars aggressively competing for position!