Massive demo shows off worm customisation and classic chaotic gameplay as the worms return for a 10th anniversary celebration. 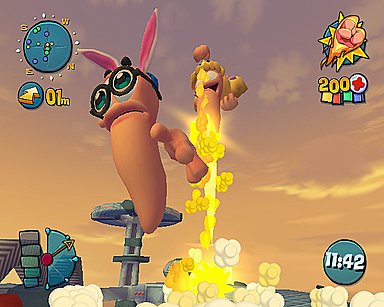 Everyone's favourite invertebrates are on their way back and it's time to pull out the big guns. Yes, prime yourself with those worms of mass destruction in the Worms 4: Mayhem PC playable demo; now available for download from www.codemasters.co.uk/worms

With just over a month until the full game's release on July 29th, get stuck into the single-player demo now and experience Worms 4: Mayhem's explosive trademark worm-versus-worm gameplay.

The Worms 4: Mayhem demo lets you go head-to-head (if you can work out which end IS the head) against other teams of worms and do your level best to blow the earth out of your rivals!

You can even get a taste of the game's new customisation options ? including the ability to create your own personalised army of worms. In the demo, you can sample the full game's huge dressing up box and try on all kinds of disco, cowboy, Scots and astronaut clobber.

Then it's into the game, with Quick Game, Multiplayer (against CPU) and a mission from the Story mode included. The demo drops your worms into the Wild West and, in the Story mission, you start with the simple objective of collecting crates (so you get a feel for the place) before coming face-to-face with your opponents for a gun slinging shootout.

And what guns and weapons you have to play with! In the demo, our armoured annelids get to take aim with loads of items from the worms' armoury including the Shotgun, Grenade, Bazooka, Poison Arrow, Sentry Gun, Sniper Rifle, Tail Nail and many more. Plus, there are a few utilities to sample such as Bubble Trouble and the Jet Pack to whiz you around the landscape.

Don't forget, when it comes to the full game, you can go beyond Team 17's devilish collection of weapons and create your very own super blasters in the Weapons Factory.

With a story-based single player campaign, more multiplayer battles than ever before ? including online competitions on PC and Live on Xbox - new challenge modes, tutorial mode, improved 3D camera and a whole host of new landscape features, Team 17's Worms 4: Mayhem will be published by Codemasters on July 29th on PC (Ł19.99 RRP), PlayStation 2 (Ł29.99) and Xbox (Ł29.99).