See the worms explode in time to Tchaikovsky's 1812 Overture in the new video now available at www.codemasters.co.uk/worms 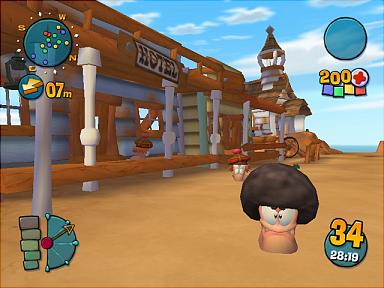 All Images (3) »
Worms 4: Mayhem, coming soon to PlayStation 2, Xbox and PC, marks 10 years of worm-on-worm violence and today the series is honoured with a 10th anniversary celebratory video available from www.codemasters.co.uk/worms

The movie sees Worms 4: Mayhem's wriggling warriors giving a spectacular synchronised performance as they are blown up in time to the music of the 1812 Overture!

It's only fitting that Tchaikovsky's dramatic piece of classical music, so often used at incredible firework displays and said to be described by the composer himself as "very loud and noisy", be used to mark the occasion with all the appropriate pomp and circumstance that the classic Team 17 series deserves.

Opening with the worms' birthday cake (complete with TNT sticks for candles and a suitably angry worm atop it), the movie takes you sweeping over the landscapes, through the customisation of both worms and weapons, and, as the 1812 Overture builds to its crescendo, the worms combust, crash, blow up, and generally show off their ability to suffer at the hands of their opponents.

Get ready to light the blue touch paper of Worms 4: Mayhem's explosive gameplay as the loveable, customisable, yet entirely destructible, worms return in classic style on PlayStation 2, Xbox and PC in Q2. See their brilliant performance now in the video at www.codemasters.co.uk/worms
Companies: Codemasters Team17
Games: Worms 4: Mayhem