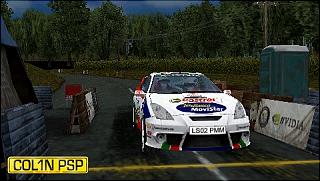 All Images (6) »
Codemasters, a leading developer and publisher of video games, today confirmed its support for the PlayStation Portable (PSP), the forthcoming handheld video game system from Sony Computer Entertainment.

A special edition of Colin McRae Rally 2005 will lead Codemasters' PSP publishing schedule. This benchmark of rally games will come to Sony's handheld format with over 30 rally cars, a diverse range of rally events, cups and championships to create a world of rallying for players on the move.

With a variety of gaming modes, including 4WD Championship, Career and Multiplayer modes over the wireless network, the game's structure will offer the perfect mobile rallying experience. The game's structure enables players to pick up and play for as long as they wish - whether it be hours or 5 minutes at a time - their progress will be updated without having to wait for a save point. Colin McRae Rally 2005 on PSP is being developed by Six By Nine, the team responsible for the hugely successful PC editions of Colin McRae Rally 3, 04 and 2005.

Codemasters' most extensive motorsport game is also coming to the handheld, in a PSP edition of the acclaimed TOCA Race Driver 2: The Ultimate Racing Simulator. With real performance cars, real damage, real physics, and real driver AI, the PSP edition is being created by Sumo Digital, the company responsible for developing the home edition of Outrun 2, and utilises the latest TOCA game engine created by Codemasters' renowned motor racing game studio.