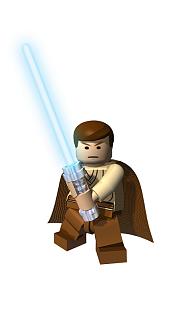 Eidos, one of the world?s leading publishers and developers of entertainment software, announces it has secured the distribution rights to LEGO Star Wars with Giant Interactive Entertainment Ltd for all countries except Japan. The game will be released in April 2005 for the PlayStation 2 computer entertainment system, Xbox video game system from Microsoft, PC and Game Boy Advance.

LEGO Star Wars combines two childhood favourites, LEGO and Star Wars, to create an innovative and exciting action-adventure title designed for young gamers. The game is based on The Phantom Menace, Attack of the Clones and the eagerly awaited Star Wars: Episode III Revenge of the Sith, slated for worldwide release in May 2005.

Under an agreement between LucasArts and Giant Interactive Ltd, LEGO Star Wars is currently being developed by Traveller's Tales for the PlayStation2, Xbox and PC. Amaze Entertainment is developing the Game Boy Advance version.

Mike McGarvey, CEO of Eidos says: ?This signing of a title with such wide spread appeal and recognition is a major coup for Eidos. We look forward to working with Giant on maximising the game?s potential.?
Companies: Amaze Eidos Giant LucasArts Traveller's Tales
People: Mike McGarvey