Launches March 2004 for PlayStation 2 and Xbox. 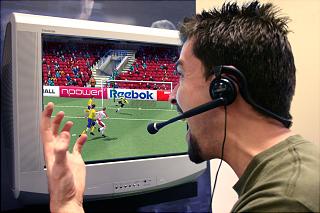 LMA Manager 2004 producer John Jenkins gets involved
All Images (2) »
LMA Manager 2004, coming to PlayStation 2 and Xbox in March, guarantees to have the most up to date stats of any football game with the complete 03/04 season data including all the latest signings and big name transfers when the January transfer window closes.

Perfect for management aficionados and all football gamers who want to lead their team, LMA Manager 2004 is hugely rewarding in play and delivers the full challenge of being a great manager, complete with all the highs, lows, pressure and, if you get it right, success.

Scout for players, train your team, pick your squad, plan your tactics, decide your strategy... but football's all about the match day action on the pitch - even for managers. LMA Manager 2004 scores by putting you in the dugout on match day and lets you remain in control.

In LMA Manager 2004, matches aren't scripted and results aren't fixed before the match kicks off; it's all about how you to react to the action on the pitch and the ability to turn what looked like certain defeat into an unlikely victory.

Every tactic, attribute and break of the ball makes a difference. Getting over-run in the centre of the park? Then switch to five across the middle or bring on some tough tackling midfielders. Now more than ever success will depend on your own tactical awareness.

Thanks to the new 3D match engine you can now see more clearly than ever how the match is panning out. With enhanced Artificial Intelligence, more tactical options and hundreds of new animations the big match day has never been so realistic or involving.

You can change team or individual player tactics instantly by shouting from the dugout and, for Xbox players, the dugout shouts feature really goes verbal for the first time as LMA Manager 2004 enables voice control using the Xbox Communicator headset. Gamers can literally shout instructions to the team into the microphone and see their verbal commands acted on by their players on the pitch.

Complete with a new vibrant look, more flexible management options, a new Fantasy Team mode, an Expert option and even more leagues, players and stats, LMA Manager 2004 is the true evolution of football management games for consoles and will launch March 2004 for PlayStation 2 and Xbox. For the latest information, videos, and your shout in the forums go to www.codemasters.co.uk/lmamanager2004
Companies: Codemasters
Games: LMA Manager 2004