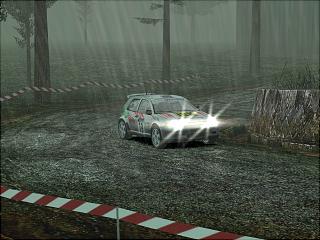 Colin McRae Rally 04, the defining moment for rally gaming and already a massive console success, is coming to PC in March 2004 complete with exhilarating LAN and online racing.

For Colin McRae Rally 04, the gear?grinding action is more intense than ever as the series' superb car handling combines with new championships, custom rallies, new single and multiplayer gaming modes, and unique car part testing challenges to win advanced technology for your car.

On PC, the game is enhanced with all-new online and LAN options enabling up to 8 players to compete simultaneously through Championship or Stage races in co-operative or competitive team challenges.

In Colin McRae Rally 04 it's the player in control - choose from over 20 rally cars and which championships to compete in. Game modes include 4-wheel drive and 2-wheel drive Championships (both with normal or advanced skill levels), Rallies, Stages, a Group B Championship featuring classic powerful rally cars and, for the professional, an Expert Championship, which demands the best performance from the most die-hard rally fan.

Universally acclaimed for having the best car handling physics engine in any racing game series, Colin McRae Rally 04 takes the already sublime handling model and improves it further. Previously the car handling employed a steering aid, which had the effect of making the car move around a central pivot point. Now the aid's been removed, effectively taking the stabilisers off, providing for a more professional and natural handling experience and you'll notice the difference over the varying terrain ? Colin McRae Rally 04 features 34 driving surfaces and 19 tyre types!

There are over 20 rally cars to be driven, including 4-wheel drive cars Citroen Xsara, Mitsubishi Lancer Evo 7 and Subaru Impreza. 2-wheel drive cars such as the Ford Puma and Fiat Punto are included alongside classic cars.

In the Championships, Colin McRae Rally 04 introduces a new element to rally gaming - testing new car parts to provide the team with advantageous technology. Now you have to earn new technology between rally events in a series of individual mini-games. The tests take place in different countries and test centres and each is specifically designed around the technology the player is testing - be it an engine, tyres or a suspension test. Complete a test challenge and a new car part becomes an available option for your car, increasing the chance of success against the competition as the season continues.

Drive like a professional and there's an Expert Championship: take to the toughest stages, locked into in-car view, using manual gears, and contend with the highest, most realistic damage settings possible and the toughest times to beat.