Colin gets a new engine. 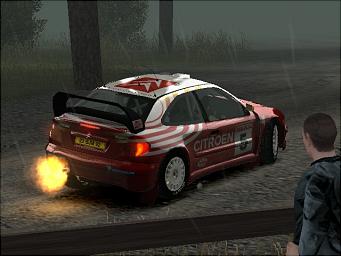 All Images (2) »
It's the rally game reinvented by the people who invented the rally game and you're getting it sooner than you think: Colin McRae Rally 04 will launch late September for PlayStation 2 and Xbox.

For Codemasters' 50-strong development team that have been working on the game since last summer, Colin McRae Rally 04 is set to be the total rally video gaming experience with eight game modes, an advanced visual engine and an all-new style.

The September launch is not the only surprise Codemasters has lined up. The engine that drives the series' sublime car handling has been enhanced to a new level of detail.

Previously the car handling employed a steering aid, which had the effect of making the car move around a central pivot point. Now the aid's been removed, effectively taking the stabilisers off, providing for a more professional, realistic and natural handling experience and you'll notice the difference, especially when performing skids and powerslides.

Says Gary Dunn, Codemasters' Director of Development: "It's all in the detail; the team has enhanced the already-powerful physics engine to make each car handle even more realistically and instinctively. Cars are modelled heavier and have more attributes added to the engine. From Colin McRae Rally 3, we've also increased the number of terrain surface types from 20 to 34, and tyre types from 10 to 19, to ensure the handling on different surfaces and weather conditions is more accurate than ever before."

Creating a new playing experience for the 6-million-selling series' fans, the high-end handling is beautifully balanced with the game's rally stages. As always, each rally stage featured has been individually designed to provide a thrilling driving challenge.

Maximising the rally gaming experience that tests both the cars and the player's rallying skills, Colin McRae Rally 04 is set to be the rally event of the year when its published by Codemasters for PlayStation 2 and Xbox in late September. Stay in the driving seat with all the latest on the game at www.codemasters.com/colinmcrae04
Companies: Codemasters
People: Gary Dunn
Games: Colin McRae Rally 04