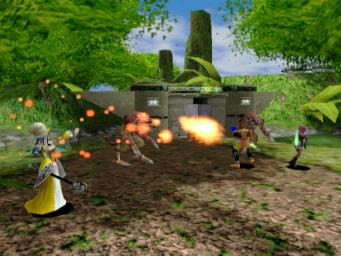 Phantasy Star Online Episode 1&2 will be the first online game available on NINTENDO GAMECUBE. To play online you will need to purchase a NINTENDO GAMECUBE Broadband adapter or Modem adapter priced at around 45-50 Euros and acquire a 'Hunters Licence', which can be purchased for Ł5.99 (€8.95) for 30 days – The first 30 days are free!

The new split-screen feature allows four friends to adventure together on the same NINTENDO GAMECUBE. Not only does PSO deliver the ultimate online gaming experience, but it also has one of the most addictive single player offline RPG experiences ever seen on a home console.

Welcome to the future. Your star is ready to rise.