World Championship Snooker 2003 to bring the new season, professional players and all the tension to PlayStation 2, Xbox and PC this spring. 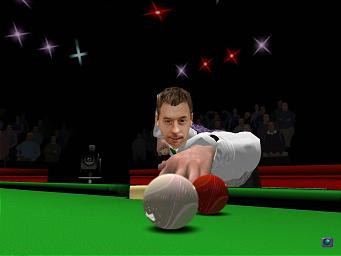 All Images (2) »
Looking better and playing better than ever, World Championship Snooker 2003 is the new generation in Codemasters' best-selling series and coming to PlayStation 2, Xbox and PC this spring, just ahead of the 2003 tournament.

Designed to be the definitive snooker simulation, World Championship Snooker 2003 will bring all the tension and atmosphere of professional snooker matches to game screens. If you've got the skill, the game can take you all the way to professional status, competing at the highest levels - even playing against current world champion Peter Ebdon at the famous Crucible Theatre to take his title.

In the Career game, compete in the World Championship season of 11 events, rising up through the rankings to take the world title. Prize money won in matches provides additional game bonuses, unlocks and secrets, such as classier cues, special tables, custom design baizes or even clothes for your player.

Presentation is television-realistic, with views from roving cameras, in-pocket, over-pocket and pocket to player cameras. All the star players featured are captured in high detail and represented in their true likeness, thanks to an advanced character modelling system (9,000-15,000 polygons per player model). A new animation system creates natural character movements, including full facial expressions, making them stunningly lifelike.

With photo realistic balls, tables and venues, the game is astonishingly detailed right down to particle chalk dust effects and chalk marks on the baize. A unique aiming system assists players in building high-scoring breaks in a very realistic manner and ensures the whole playing experience is incredibly immersive.

Snooker celebrity Dennis Taylor makes an in-game appearance. Need to improve snooker skills? Dennis Taylor hosts a dedicated Coaching mode. From beginners who want to perfect basic shots, right through to learning advanced cue skills, it can improve a player's game performance and even give them the edge on a real-life snooker table.