Ninja madness coming to a PS2 near you in May 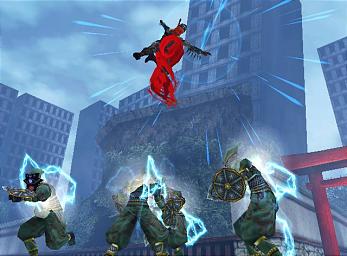 All Images (2) »
Sony Computer Entertainment and Sega Europe are pleased to announce that a distribution deal has been signed to bring the update of the classic Shinobi series to PlayStation 2 owners across PAL markets from May 2003.

With a history dating back 1987, Shinobi is one of the true classic gaming series, the PlayStation 2 version being the first to appear on a non-Sega console.

Developed by Sega's Overworks development team, Shinobi sees you take control of Hotsuma, who on discovering his mystical Oboro clan has been slaughtered by unknown force sets off to seek terrible vengeance on those responsible.

At the same time a terrible earthquake hits Tokyo, and golden castle emerges out of the rubble at Tokyo Water Front City, a place once covered by large skyscrapers and scurrying salary men. Dark deities and their minions roam the street turning the once affluent metropolis of Tokyo into a city of pure Evil... are the two somehow connected?
Companies: SEGA Sony
Games: Shinobi