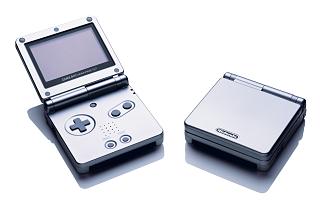 Guaranteed to meet the needs of the hippest gamers who demand premium quality both in design and technology, this sleek new addition to the range is set to launch in Europe on 28 March 2003.

Infamous for pioneering the genre of handheld gaming, from the very first Game and Watch games of the 1980s to the hugely successful Game Boy Advance launched in 2001, Nintendo has now given the console a completely new ultra stylish design to appeal to the most style conscious consumers of handheld technology worldwide.

The Game Boy Advance SP is a truly pocket-sized gadget, at only 84.6mm from front to back, 82mm wide, and an incredibly svelte 24.3mm thin. Nintendo has introduced further innovations to suit its new image, including a flip-top screen with an integrated front screen light, plus a rechargeable lithium battery similar to those found in mobile phones, offering gamers over 10 hours of continuous illuminated game-play. When the front light is turned off, the continual play increases to approximately 18 hours.

The console will be available in three premium metallic finishes, silver, black and blue, and the Game Boy Advance SP has the same powerful capabilities which have propelled the success of Game Boy Advance across Europe.

David Gosen, Managing Director, Nintendo of Europe stated, "With the launch of Game Boy Advance SP, Nintendo will be able to place their gaming expertise into the hands of new users who value outstanding design as highly as technology. There's an incredible range of games already available, and an ever-increasing number designed for players who may not have held a console since the days of Tetris. Following the incredible success of the Game Boy Advance, this is a very exciting time for Nintendo and an exceptional start to 2003."

Technical specifications for the SP