Codemasters comes to Nintendo GameCube with its best-selling gaming titles.

Codemasters confirms its commitment to the Nintendo GameCube console with a blockbuster portfolio of titles planned for 2003. 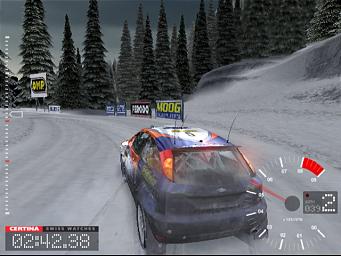 The company is developing specific GameCube editions of its biggest gaming brands. Four of Codemasters' key titles are confirmed for the console and include Colin McRae Rally 3, LMA Manager, Club Football, and the recently announced Shoot to Kill will form the initial line up.

Mike Hayes, Codemasters' Marketing Director, enthuses: "Codemasters' ethos is to support the world's most successful gaming formats. Nintendo has produced an excellent machine in the GameCube and we believe it provides the base for our developers to produce superb editions of these titles. Given Nintendo's continued strength in the global market, GameCube will become one of Codemasters' key publishing platforms."

Racing game fans will be ecstatic to learn that a turbo charged edition of Codemasters' leading motor sport franchise Colin McRae Rally will appear on the GameCube.

Colin McRae Rally 3 puts players in the driving seat with the one simple instruction: You are Colin McRae. This totally immersive edition of the best-selling rally motorsport game series puts the pressure on as the player takes on the role of the world famous driver as he's given a three year contract to win a series of international championships for Ford.

Codemasters' reputation for delivering spot on sports games will be well in evidence with LMA Manager and the Club Football series of team-specific football action games for GameCube.

LMA Manager will offer an enhanced version of the world's most popular football management game for video game consoles. It will be retitled in key territories utilising individual territory branding and licenses from across Europe.

Club Football is a unique concept in football gaming and will offer 15 team-specific versions simultaneously when it launches. Delivering a club specific game for every fan, it taps into the very soul of football - the tribal fanaticism of club supporters. Each game will carry the headline brand of an individual football club and the overall series will be sub-branded as Club Football.