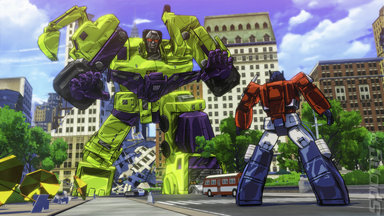 Players will also receive three powerful weapons with their pre-order:

· The Dark Star Sabre, a fearsome sword which radiates waves of dark energy with every swing.

· The Photon Disruptor cannon for huge damage at short range.


Activision also released a new behind-the-scenes video with the legendary voice of OPTIMUS PRIME, Peter Cullen. TRANSFORMERS: Devastation brings a new energy to Hasbro?s iconic Generations characters, but for Cullen, honouring the qualities that have made OPTIMUS PRIME a hero for audiences for over 30 years is still at the core of this new experience.

TRANSFORMERS: Devastation is scheduled to launch on 9th October on the PlayStation®4 and PlayStation®3 computer entertainment systems, Xbox One, Xbox 360, and Windows PC via Steam. Pre-orders for the game are already available at many major retailers and on the PlayStation® Store; Xbox Games Store pre-orders are expected to open in early September. For more information, please visit www.TransformersGame.com and www.facebook.com/TransformersGame.