Nintendo?s 2015 Concert Series for ~The Legend of Zelda~ Comes to Ireland for the First-Time Ever in November 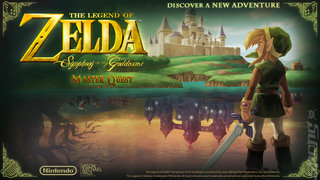 DUBLIN, Ireland, June 9, 2015 -- For the first time ever, Nintendo?s The Legend of Zelda symphony concert series will come to Dublin with the latest tour ?Master Quest.? The show, celebrating the beloved franchise will continue its world tour on 22 November in Dublin at The Convention Centre. Dublin?s finest musicians and singers will perform orchestral arrangements of music from the games of The Legend of Zelda universe, accompanied by video content from the games themselves. Master Quest will feature music and images from Nintendo?s The Legend of Zelda?s most recent game releases. For a full schedule listing and ticket links, please visit: www.zelda-symphony.com/schedule.

Tickets for the Dublin performance are now available directly at http://www.ticketmaster.ie/event/18004E87ABF53A95.

Nintendo has teamed up with Jason Michael Paul Productions, Inc. to provide video game fans with the ultimate musical experience for The Legend of Zelda. The highlight of this new musical program is a full four-movement symphony that will guide fans through a musical retelling of key chapters from The Legend of Zelda franchise. The multimedia show will pair iconic music and gorgeous visuals from classic Zelda titles, as well as the newest game in the series, The Legend of Zelda: A Link Between Worlds for the Nintendo 3DS.

?We realise that The Legend of Zelda fans are all over the world, and we want to bring this multimedia experience to them, too,? said Simon Kemp, General Manager of Nintendo UK. ?Game music, especially game music as iconic as Zelda, is wonderful because no matter what language or country, it?s familiar for everyone to enjoy.?

?Master Quest will surprise and delight The Legend of Zelda concert newcomers as well as faithful followers,? said Jason Michael Paul- President Jason Michael Paul Productions, Inc. ?It features the same quintessential images and songs best known from The Legend of Zelda franchise, but with the addition of never before seen or heard performances.?

For more information about the concerts, visit http://www.zelda-symphony.com