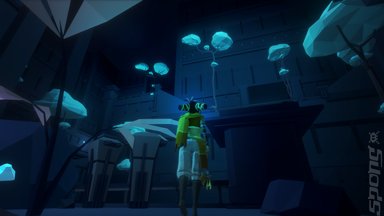 AER puts players in the shoes of Auk, a pilgrim girl, to explore an unbelievable open world beneath her feet and wings. Wings? Yes, indeed! Auk has a rare gift: She can turn into a bird and is one of the few people who can reach even the most remote places in her homeland of flying islands, in search for the ?Memories of the Past?. On her journey she encounters other shape shifters, visits the ruins of the old gods and has to face dark creatures to revive the world of AER from menacing shadows.

In a genre mix between action adventure and flight exploration, players will join Auk on her pilgrimage. The surreal style of AER will be accompanied by reduced but colorful low poly graphics that underline the quiet tone of the game in a fitting way.

AER will be published worldwide on PlayStation®4, Xbox One?, PC, Mac and Linux by Daedalic Entertainment. The game will be released in 2016.

The company employs a staff of approximately 100 people, and its famed Writer's Room, with its cadre of authors, is a unique feature in Germany's media industry.

Upcoming Daedalic titles such as "Silence - The Whispered World 2" and "The Devil's Men" will raise the bar for the adventure genre. With "Blackguards" and "Blackguards 2" the company has also set itself up as a key RPG developer.

As a publisher, Daedalic entertainment publishes uncommon and remarkable games like "Divinity: Original Sin", "Oh my Gore" and "Randal's Monday.?

About Forgotten Key
Forgotten Key is a Swedish independent game studio founded in Karlshamn in the midst of 2011 by four students of Blekinge Institute of Technology. Forgotten Key strives to give players atmospheric experiences with distinctive and amazing adventures.

At the moment the team consists of six ambitious individuals making atmospheric games. They seek to experiment with video games in a way that creates an experience bigger than the entertainment that the mechanics provide.

During the short time the studio has been around, Forgotten Key has won the competition ?Game Concept Challenge? three years in a row (2011 with The Shine of a Star, 2012 with BLANCO and 2013 with AER) and most recently gained recognition with the concept for AER.

?PlayStation? is a registered trademark of Sony Computer Entertainment Inc. ?PS4? is a trademark of the same company.

Microsoft®, Xbox®, Xbox 360®, Xbox One?, Xbox LIVE®, and the Xbox logos are trademarks of the Microsoft® group of companies.
Companies: Daedalic Forgotten Key