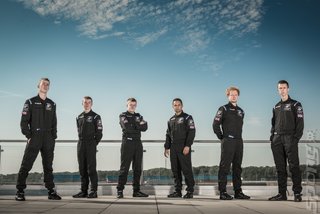 The innovative GT Academy competition, a partnership between Nissan and PlayStation«, challenges the conventions of motorsport by taking some of the fastest Gran Turismo« gamers in Europe and fast-tracking one of them to become a professional racing driver. Each episode will be repeated on Saturdays (30th November at 5pm, 7th December at 5.30pm and 14th December at 5pm).

With the highly anticipated Gran Turismo«6 launching for PlayStation«3 on 6 December, this year the GT Academy qualifying stage took place on an exclusive GT6? demo to give fans a sneak preview of the game. Over 765,000 gamers in 16 European countries took part in the qualifying rounds. National Final events were then held throughout Europe before 42 of the finest PlayStation gamers descended on Silverstone Circuit, England, in September 2013 for a week-long battle in the demanding GT Academy European Race Camp. This is where the transition from virtual expert to real racing driver began.

Driving various racing cars, from Nissan Micra stock cars to the powerful Nissan GT-R, the finalists were put through their paces to pinpoint who had the most potential to become a racing driver. They were also tested off-track, with driver psychology training and gruelling fitness sessions, to discover who had a winning mentality and who would crack under pressure.

ITV4 follows the UK?s six competitors as they strive to realise their dream of becoming a racing driver. With eliminations taking place throughout Race Camp, viewers will experience the heartbreak and the triumph as the group is whittled down to the last-man-standing for the UK, who then goes head-to-head with the top performers from the rest of Europe. The first ever British GT Academy winner Jann Mardenborough, BTCC driver Paul O?Neill and British female karting champion Tiff Chittenden were on hand to offer advice and guidance to the fledgling drivers, as well as having the tough job of deciding the outcome of the eliminations.

Formula 1 and Le Mans 24 Hours winner Johnny Herbert has been an advocate of the GT Academy programme since its first year in 2008, and returned this year as the International Head Judge. There could only be one winner overall and the ultimate decision fell to him. The new champion?s prize is to embark on an intensive driver development programme this winter to prepare for racing with Nissan in a GT3 Championship in 2014.

GT Academy 2013 is the fifth iteration of the virtual-to-reality competition. Former GT Academy winners have gone on to great success, with the inaugural champion Lucas Ordo˝ez winning the Blancpain Endurance Series pro-am title this year, having already clocked up two Le Mans 24 Hours podium results to his name. The ITV4 GT Academy series examines the science of racing as it takes viewers on a high-tension journey from the sofa to a real race track, while contestants slug it out to determine who will be the next virtual-to-reality professional racing driver. The show delivers race-fuelled action and emotional must-see moments that will keep racing fans and gamers alike on the edge of their seats.

The progress of the new GT Academy European Champion can be followed on www.facebook.com/GTAcademy and www.twitter.com/GTAcademy.

A free online Gran Turismo«6 GT Academy qualification demo is open to anyone with a PlayStation«3 to download (terms and conditions apply). The fastest gamers in each participating territory gain access to their region?s National Final event. A number of competitors can also gain access via a series of Live Gran Turismo events organised locally. The National Finals add driving, fitness and a media element to the gaming.

From National Finals, the action moves to Silverstone for the legendary Race Camp, where the competitors are put through their paces on track in Nissan sports cars under the watchful eyes of high profile judges and mentors. One winner from each of Europe, USA, Russia and Germany will be invited to take part in the intensive Driver Development Programme. They could qualify for an international race license and potentially join Nissan?s elite Nismo athletes.

About the Gran Turismo« Franchise
Gran Turismo« celebrates its 15th anniversary in 2013, having first appeared internationally in 1998. The multi-award-winning franchise has been the most successful ever for PlayStation«, and in 2013 it also surpassed worldwide sales of 70 million units. Various iterations of Gran Turismo have been created for PlayStation«, PlayStation«2 computer entertainment system, PlayStation«3 and PSP? (PlayStation« Portable), and have always been regarded as the best and most authentic driving simulators ever created due to true-to-life graphics, authentic physics technology and design. Since the inception of Gran Turismo, famed creator Kazunori Yamauchi and Polyphony Digital Inc. in Japan have revolutionized the racing category as we know it today. His offerings provide the most realistic driving simulation in the industry and a unique medium for automotive manufacturers to showcase their products. Gran Turismo«5, the latest iteration of the game, was released on 24 November, 2010 and has sold 10 million units worldwide.

More information about PlayStation products can be found at www.playstation.com.

PlayStation, PS4, PS3, PS2 and PSP are registered trademarks or trademarks of Sony Computer Entertainment Inc. All other trademarks are property of their respective owners.

About Nissan in Europe
Nissan has one of the most comprehensive European presences of any overseas manufacturer, employing more than 14,500 staff across locally-based design, research & development, manufacturing, logistics and sales & marketing operations. Last year Nissan plants in the UK, Spain and Russia produced more than 695,000 vehicles including mini-MPVs, award-winning crossovers, SUVs and commercial vehicles. Nissan now offers 24 diverse and innovative products for sale in Europe today, and is positioned to become the number one Asian brand in Europe.