Buckle Up! ?Garfield?s Wild Ride? Out Now For Smartphones and Tablets 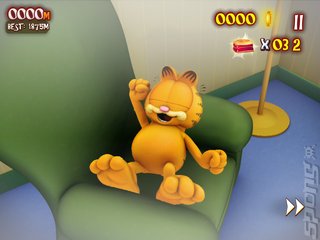 All Images (6) »
CERGY-PONTOISE, FRANCE - 27 June 2013 Yes he?s back. The lasagna-loving lord of laziness, Garfield, has finally found a way to run off some of those calories in Garfield?s Wild Ride, the crazed side-scrolling runner out now on smartphones and tablets.

Unfortunately for Garfield?s waistline, all this running isn?t going to do him much good, as it all happens when he?s fast asleep. It turns out that when he?s not dreaming of lasagna, Garfield imagines himself hurtling through the air light as a feather in a world loaded with cat gymnastics, loony pick-ups and batty bonuses. Unlikely as it sounds, in his dreams Garfield can defy gravity.

Garfield?s Wild Ride offers accessible single-finger gameplay to guide Garfield through a series of treacherous obstacles as players tackle 45 different missions across 3 radically different environments. Unlikely bonus pickups include jockeying a giant Odie or donning a helmet for a spin on a skateboard, with the option to purchase coins for extra in-game items. Garfield can also be fully customized in wild ways from dashing hats to space-cat, with more costumes available to buy in-game and coming in future updates. Jettison lasagna ? it?s time to lift off!

Co-published by NAMCO BANDAI Games Europe and Anuman Interactive (under Microďds ? Games for All label), Garfield?s Wild Ride is available now for iPhone, iPad and Android devices. The game is also coming soon to PC and Mac.

About NAMCO BANDAI Games Europe S.A.S.
NAMCO BANDAI Games Europe S.A.S., part of NAMCO BANDAI Holdings Inc., is a leading global publisher and developer of interactive content for platforms including all major video game consoles and PC, with marketing and sales operations in 50 countries across Europe, the Middle East, Africa and Australasia. The company is known for creating and publishing many of the industry?s top video game franchises, including PAC-MAN?, Tekken?, SOULCALIBUR?, NARUTO?, NARUTO SHIPPUDEN?, Dragon Ball®, GALAGA?, RIDGE RACER? and ACE COMBAT?.

About GARFIELD
GARFIELD was born on the comics pages on June 19, 1978. The mastermind of cartoonist Jim Davis, GARFIELD is a humorous strip centered on the lives of a quick-witted orange cat who loves lasagna, coffee, and his remote control; Jon Arbuckle, his owner; and Odie, a sweet but dumb dog. GARFIELD was introduced to the world in just 41 newspapers and is now the most widely syndicated comic strip ever, appearing in 2400 newspapers.

The success of the comic strip spawned a popular animated TV show, Garfield and Friends, which appeared on CBS-TV from 1988 to 1995, and is currently in worldwide syndication. In 2009, The Garfield Show debuted on Cartoon Network USA and now airs in 135 countries. PEOPLE magazine called the show, "One of the Year's Best New Kids' Shows" in 2009.

In 2004, Twentieth Century Fox invited Garfield to star in his first-ever full-length feature film, Garfield: The Movie. A sequel, Garfield: A Tail of Two Kitties was released in June 2006. The movies earned over $340 million at the box office. Garfield has also starred in three CGI animated movies, all penned by Jim Davis. Fox released Garfield Gets Real (2007), Garfield's Fun Fest (2008), and Garfield's Pet Force (2009) on DVD and in limited theatrical release.

Garfield also entertains his fans on a popular web site, garfield.com, and engages kids in interesting and pedagogically sound activities to promote literacy at professorgarfield.org. English, Science and Life Skills are among the topics Garfield and his pals address at learninglab.org, a public service of the Virginia Department of Education.

Garfield has long been considered a ?classic? or ?evergreen? property because he has not only endured, but continues to be fresh and funny after nearly 35 years in the limelight.

About Paws, Inc.
Cartoonist Jim Davis? company, Paws, Inc., located near Albany, Indiana, was founded in 1981 to handle the creative end of the Garfield licensing business. Today, Paws is the sole owner of all copyrights and trademarks for the Garfield property, and controls not only the creative angle of the fat cat?s flourishing empire, but also the licensing, marketing, and brand management of Garfield and the Garfield characters.

About Anuman Interactive
Created in 2000, Anuman Interactive is a French publisher of softwares, applications and video games for the general public, and is best known for its Architecture, Highway Code and Creative Activities titles. With the experience and know-how of its teams, Anuman Interactive has widened its sphere, which mainly includes practical and edutainment titles, and now encompasses adventure video games, an industry in which it is becoming a major international player, thanks to the Microďds (Amerzone, Dracula, Still Life, Syberia) brand.

At the end of 2009, Anuman Interactive joined the Media-Participations group, the 3rd largest publishing group in France and the top comic book publishing group in Europe, as a subsidiary company, and has shared its multimedia expertise with the different companies within the group to consolidate its progress in the development of new technologies.
Today, Anuman Interactive develops, publishes and distributes applications, as well as video games, on a number of different platforms (PC, Mac, Consoles, iPhone, iPad, Android etc.), thanks to a rich and varied license catalogue. As both a major player in Apple's AppStore, and as the partner of globally known download platforms like Steam or Big Fish, these are certainly exciting times for Anuman Interactive!

MICROĎDS ? GAMES FOR ALL is a trademark of ANUMAN INTERACTIVE © PAWS. All rights reserved
Companies: Namco Bandai