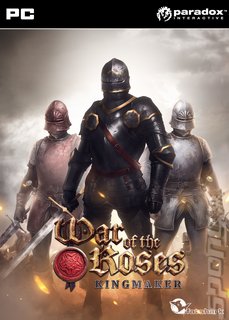 REYKJAVIK Ś February 1, 2013 Ś Paradox Interactive, a publisher of games and a seeker of the throne, and Fatshark, valiant knights trapped in the modern era, today announced War of the Roses: Kingmaker, a gold edition of the game which allows aspiring knights a clear path to the throne by including all the top-notch weapons, armor, and perks that have been released since the titleÆs inception in October 2012. The new edition will be available in late Q1 2013.

In War of the Roses: Kingmaker, loyalists to the house of York or Lancaster will now have access to the content available since release, including the previously exclusive armor sets for both the red and white rose. Kingmaker will also introduce two new game modesŚAssault and Assault CastleŚwhere knights will face new attack and defense scenarios that aim to truly test their skill as a team.

A free trial version of War of the Roses is also planned for release February 6, which will allow anyone to download and play the game without cost. The trial version will include access to all online battles, enabling aspiring warriors to fight alongside all existing players ¢ paid or trial. The trial version will limit players by disallowing any unlocks, giving access only to the gameÆs base classes and weapons, giving trial players a chance to live true knighthood.

In addition, Paradox will soon release a new premium DLC for War of the Roses, starring famously boisterous British actor BRIAN BLESSED as a new narrator for the game. BlessedÆs booming voice will inspire knights by announcing in-game events and warnings, giving new meaning to the iconic command to ōKill the enemy!ö

On top of all of these new editions, all versions of War of the Roses are scheduled to receive new content in the form of the new ōOutside the Lawö update, which will add an all new deep forest map to the gameÆs selection, along with armor pieces Robin of Loxley would be proud of.

Paradox Interactive will be streaming War of the Roses today at 4 p.m. GMT (8 a.m. PST) during its convention being held in Reykjavik, Iceland. Special guests NorthernLion, RageGaming, and Angry Joe, along with Executive Producer Gordon Van Dyke, and others, will narrate the action as attendees will be engrossed in a tournament to the death. To check out the mayhem, please visit the official Paradox Interactive channel on TwitchTV at www.twitch.tv/paradoxinteractive.

To find out more about War of the Roses and prepare for an even deadlier battle, visit waroftherosesthegame.com.
Companies: Fatshark Paradox Interactive
Games: War of the Roses