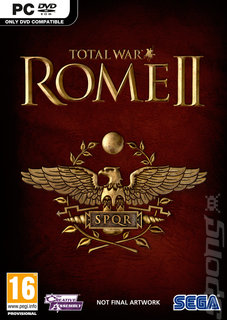 Encompassing one of the best-known periods in world history, Total War: Rome II? will combine the most expansive turn-based campaign and the largest, most cinematic real-time battles yet seen in any game.

Total War: Rome II? will sink players into the dangerous political machinations of Rome's senate, while asking them to struggle with family dilemmas and question the loyalty of ?friends' and allies. Leading the greatest army ever seen into battle will be just one challenge you will face at the head of the world's first superpower.

Will you help forge an empire? Restore the Republic? Or grasp the reins of power for yourself, and assume the hated title of tyrant? Who will you conquer? Who will you betray? Who will you sacrifice?

How far will you go for Rome?
"Our games have always encompassed a grand vision", said Mike Simpson, Creative Director. "But we're now pushing that vision at both ends of the spectrum. From the immense reach of the sandbox campaign right down to the human-level drama of a single warrior on the battlefield, we're aiming for an unprecedented level of detail and scale".

"In our 25th year of games development, it feels fitting to return to our most critically acclaimed era", continued Rob Bartholomew, Brand Director. "There's been a multi-generational leap in technology since the original game and we are ready to set another benchmark in gaming."

Total War: Rome II? is due for release in 2013. For more information, and to view the Rome II announcement trailer, visit www.totalwar.com/romeII.

About The Creative Assembly
Founded in 1987 and based in Horsham, West Sussex, The Creative Assembly is one of the UK's most successful and established game studios. Creator of the multi award-winning Total War strategy series, the studio has received numerous press, industry and consumer accolades, including BAFTA and the Develop Industry Excellence awards. With nearly 200 highly talented developers and counting, the studio is expanding to embark on thrilling new triple-A console, PC and mobile projects.

About SEGA® Europe Ltd.:
SEGA® Europe Ltd. is the European Distribution arm of Tokyo, Japan-based SEGA® Corporation, and a worldwide leader in interactive entertainment both inside and outside the home. The company develops and distributes interactive entertainment software products for a variety of hardware platforms including PC, wireless devices, and those manufactured by Nintendo, Microsoft and Sony Computer Entertainment Europe. SEGA Europe's web site is located at www.sega.com

About SEGA® of America, Inc.:
SEGA® of America, Inc. is the American arm of Tokyo, Japan-based SEGA® Corporation, a worldwide leader in interactive entertainment both inside and outside the home. The company develops, publishes and distributes interactive entertainment software products for a variety of hardware platforms including PC, wireless devices, and those manufactured by Nintendo, Microsoft and Sony Computer Entertainment Inc. SEGA of America's Web site is located at www.sega.com
Companies: Creative Assembly SEGA
Games: Total War: Rome II