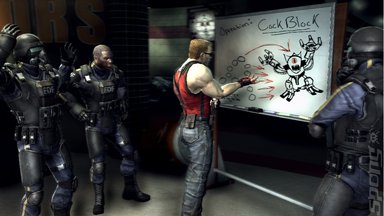 Strauss Zelnick, Chairman and CEO of Take-Two, commented, "During the first quarter, we delivered revenue and Non-GAAP profits that were in line with our expectations. Our results benefited from the launch of Rockstar's groundbreaking and critically acclaimed title - L.A. Noire, the release of Duke Nukem Forever, continued strong sales of NBA 2K11 and Red Dead Redemption, and growth in digitally delivered content. Given our solid performance year-to-date and robust pipeline of upcoming new releases, we are well positioned to be profitable on a Non-GAAP basis in fiscal year 2012.

"Looking ahead to fiscal year 2013, we have already announced three exciting new releases: BioShock Infinite, Spec Ops: The Line, and Borderlands 2, and we have a very strong pipeline of yet-to-be announced titles in development. As a result, we continue to expect to achieve substantial revenue and earnings growth, including Non-GAAP net income in excess of $2.00 per share.

"We also continue to make significant investments in content for online and mobile gaming platforms. We recently released our ninth offering for Apple's iOS mobile operating system - the Sid Meier's Pirates! App for the iPad, launched our first social game - Sid Meier's Civilization World, for Facebook, and we are hard at work with our partners in Asia on our three previously announced initiatives to develop online games. These initiatives are just the beginning of our ongoing efforts to drive growth through these emerging and exciting areas of gaming."

2K Play released the Company's first offering for Kinect for Xbox 360(R), Carnival Games: Monkey See, Monkey Do(TM), and supported the title with downloadable content packs. The title will be featured in worldwide promotions with Microsoft this holiday season.
Rockstar Games released L.A. Noire on May 17, 2011 in North America and May 20, 2011 internationally. Major news outlets and video game critics across the world have applauded its ambition with great review scores stating that L.A. Noire is "a breakthrough for games as a whole" and a "stunning accomplishment" that "sets a new standard for storytelling". The title has sold-in more than 4 million units worldwide since its launch and has been supported by several downloadable content packs. The PC version of the title is scheduled to be released this fall.
2K Play announced that it plans to release Nicktoons MLB on September 13, 2011. The game will feature characters from Nickelodeon's popular Nicktoons series and all 30 Major League Baseball teams.
2K Sports extended its long-term partnership with the National Basketball Association to develop and publish the best-selling NBA 2Kbasketball franchise for an additional multi-year period. The latest iteration, NBA 2K11, has sold-in nearly 5.5 million units worldwide and received the highest scores in the history of the franchise (89 - Metacritic.com).
2K Sports announced a new partnership with Nexon Corporation to develop and publish an online baseball simulationgame for the South Korean market.
2K Games announced a partnership with XLGAMES, Inc. to develop a massively multiplayer online game for the Asian market based on one of 2K's top-selling franchises.
2K Games announced that it plans to release XCOM on March 6, 2012 in North America and March 9, 2012 internationally.
2K Play announced that it plans to release Let's Cheer!, Nickelodeon Dance and a new slate of Nickelodeon titles throughout the fall and holiday season.
2K Games released Duke Nukem Forever on June 10, 2011 internationally and June 14, 2011 in North America. The title is being supported with downloadable content.
2K Games' BioShock Infinite, developed by Irrational Games and planned for release in calendar year 2012, won 77 editorial awards, including 41 "Game of Show" awards, at E3 2011.
2K Games launched the Company's first social game, Sid Meier's Civilization World, for Facebook. The title was developed by Firaxis Games.
2K Sports announced that NBA 2K12 is planned for release on October 4, 2011, and will offer three separate covers for the Xbox 360 and PS3 versions featuring NBA legends Michael Jordan, Larry Bird and Magic Johnson, as well as historic teams and players that can be unlocked for in-game use.
2K Games released the Sid Meier's Pirates! App for the iPad.
2K Games announced that Borderlands 2, the next installment in the franchise that has sold-in over 4.5 million units worldwide, is currently in development with Gearbox Software and expected to launch in fiscal year 2013.
Rockstar Games' Red Dead Redemption franchise has sold-in over 11 million units worldwide since launching in May 2010, including over 2 million units of the Red Dead Redemption: Undead Nightmare standalone disc.
Financial Outlook for Fiscal 2012

Second Quarter
Ending 9/30/2011 Fiscal Year
Ending 3/31/2012
Revenue $70 to $85 Million $1.0 to $1.1 Billion
Non-GAAP Net Income (Loss) per share ($0.65) to ($0.55) $0.10 to $0.35
Stock-based compensation
expense per share (a)
$0.05 $0.28
Non-cash interest expense related to convertible debt
$0.02
$0.09
Non-cash tax expense $0.00 $0.02
(a)
The Company's stock-based compensation expense for the periods above includes the cost of approximately 0.9 million shares previously issued to ZelnickMedia
that are subject to variable accounting. Actual expense to be recorded in connection with these shares is dependent upon several factors, including future
changes in Take-Two's stock price.
Key assumptions and dependencies underlying the Company's guidance include continued consumer acceptance of the Xbox 360(R) video game and entertainment system from Microsoft, PlayStation(R)3 computer entertainment system, and Wii(TM) system; the ability to develop and publish products that capture market share for these current generation systems while continuing to leverage opportunities on certain prior generation platforms; the timely delivery of the titles detailed in this release; and stable foreign exchange rates. See also "Cautionary Note Regarding Forward Looking Statements" below.

Take-Two will host a conference call today at 4:30 p.m. Eastern Time to review these results and discuss other topics. The call can be accessed by dialing (877) 407-0984 or (201) 689-8577. A live listen-only webcast of the call will be available by visiting http://ir.take2games.com and a replay will be available following the call at the same location.

In addition to reporting financial results in accordance with U.S. generally accepted accounting principles (GAAP), the Company uses Non-GAAP measures of financial performance that exclude certain non-recurring or non-cash items. Non-GAAP gross profit, income (loss) and earnings (loss) per share are measures that exclude certain non-recurring or non-cash items and should be considered in addition to results prepared in accordance with GAAP. They are not intended to be considered in isolation from, as a substitute for, or superior to, GAAP results. These Non-GAAP financial measures may be different from similarly titled measures used by other companies.

Earnings (loss) before interest, taxes, depreciation and amortization ("EBITDA") is a financial measure not calculated and presented in accordance with U.S. GAAP. Management uses EBITDA adjusted for business reorganization and related expenses ("Adjusted EBITDA"), among other measures, in evaluating the performance of the Company's business units. Adjusted EBITDA is also a significant component of the Company's incentive compensation plans. Adjusted EBITDA should not be considered in isolation from, or as a substitute for, net income/(loss) prepared in accordance with GAAP.

Certain prior year amounts have been reclassified to conform to current year presentation.

The statements contained herein which are not historical facts are considered forward-looking statements under federal securities laws and may be identified by words such as "anticipates," "believes," "estimates," "expects," "intends," "plans," "potential," "predicts," "projects," "seeks," "will," or words of similar meaning and include, but are not limited to, statements regarding the outlook for the Company's future business and financial performance. Such forward-looking statements are based on the current beliefs of our management as well as assumptions made by and information currently available to them, which are subject to inherent uncertainties, risks and changes in circumstances that are difficult to predict. Actual outcomes and results may vary materially from these forward-looking statements based on a variety of risks and uncertainties including: our dependence on key management and product development personnel, our dependence on our Grand Theft Auto products and our ability to develop other hit titles for current generation platforms, the timely release and significant market acceptance of our games, the ability to maintain acceptable pricing levels on our games, our ability to raise capital if needed and risks associated with international operations. Other important factors and information are contained in the Company's Annual Report on Form 10-K for the fiscal year ended March 31, 2011, in the section entitled "Risk Factors," and the Company's other periodic filings with the SEC, which can be accessed at http://www.take2games.com. All forward-looking statements are qualified by these cautionary statements and apply only as of the date they are made. The Company undertakes no obligation to update any forward-looking statement, whether as a result of new information, future events or otherwise.
Companies: Take 2