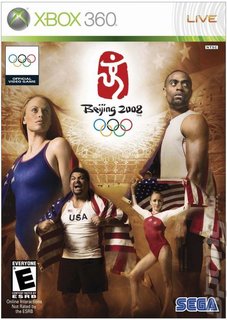 SAN FRANCISCO --(Business Wire)-- Apr. 15, 2008 SEGA(R) of America, Inc. today announced it is partnering with top U.S. gold medal contenders Amanda Beard, Tyson Gay, Nastia Liukin and Reese Hoffa to appear on the cover of the upcoming video game Beijing 2008(TM) - The Official Video Game of the Olympic Games for the Xbox 360(R) video game and entertainment system, the PlayStation(R)3 computer entertainment system, and for the PC. These outstanding U.S. athletes represent the elite in each of their respective sports and are among the favorites to hoist the American flag and bring home gold this summer in the Beijing 2008 Olympic Games.

"These talented individuals epitomize what it is to be an Olympic athlete and we are extremely excited to have them grace the cover of our Beijing 2008(TM) video game," said Sean Ratcliff, VP of Marketing, SEGA of America, Inc. "With Beijing 2008(TM), SEGA is striving to develop the very best Olympic video game ever and we couldn't be more proud to have them represent our game and our country this summer."

Amanda Beard, a seven time Olympic medalist, is expected to continue her success as she prepares for her fourth Olympic Games this year in Beijing, China. She has competed in the Atlanta 1996 Games, Sydney 2000 Games and Athens 2004 Games, making her one of the most prolific Olympic athletes ever. Amanda became the second youngest gold-medal swimmer in USA swimming history when she won her first gold medal at the Atlanta Games at the age of 14. She currently holds the Olympic Record in the 200m breaststroke and the American record in the 100m breaststroke, 200m breaststroke and 200m individual medley.

Tyson Gay will be sprinting for the title of "Fastest Man on Earth" as he makes his bid to win gold and shatter Olympic Records this year at the Beijing 2008 Games. Last summer, he became a double World Champion at 100m and 200m, and topped that off by winning gold as part of the U.S. 4x100m relay team. Tyson was selected as the IAAF (International Association of Athletics Federations) male World Athlete of the Year for 2007 and is currently ranked #1 in the world.

Nastia Liukin is a Senior International Elite gymnast and is expected to be one of the top contenders on the U.S. Women's Gymnastic Olympic Team. Specializing in uneven bars and balance beam events, she is a two-time world champion, a six-time world medalist, a four-time U.S. National Champion and has won the American Cup titles in 2006 and 2008. Tied for the most ever, Nastia is a nine-time World Championship medalist and is widely considered to be the most graceful and artistic gymnast in the world today.

Reese Hoffa is poised to take home gold in men's shot put, when he makes his second Olympic Games appearance of his career this summer in Beijing. A member of the U.S. Olympic Team in the Athens 2004 Games, he has earned a number of prestigious titles in his shot putting career including 2007 USA outdoor champion, 2006 world indoor champion, 2004 world indoor silver medalist and 2003 Pan American Games gold medalist. Reese is the reigning world champion in shot put and currently ranks 11th on the world all-time list for the sport.

Beijing 2008(TM) features realistic next-gen visuals and will provide players with an authentic simulation of over 35 events (the most of any Olympic video game) from the upcoming Beijing 2008 Olympic Games, giving gamers the opportunity to compete in, and get an early look at, many of the official venues. The online functionality of all three platforms will ensure that for the very first time, fans of the Olympic Games will be able to experience the thrill of competing against other gamers across the globe in the world's greatest sporting event. The game will also incorporate innovative control schemes that allow novice gamers to learn how to play the game, while providing experienced gamers the chance to set new records.

Developed by Eurocom Entertainment Software, Beijing 2008(TM) for Xbox 360, PlayStation 3 and the PC is set for release in the summer of 2008. For further information, please go to http://www.olympicvideogames.com. For all press assets, visit http://segapr.segaamerica.com.

About SEGA of America, Inc.:

SEGA(R) of America, Inc. is the American arm of Tokyo, Japan-based SEGA Corporation, a worldwide leader in interactive entertainment both inside and outside the home. The company develops, publishes and distributes interactive entertainment software products for a variety of hardware platforms including PC, wireless devices, and those manufactured by Nintendo, Microsoft and Sony Computer Entertainment Inc. SEGA of America's Web site is located at http://www.sega.com.

ISM is active in managing and developing entertainment software applications. In addition to the exclusive interactive entertainment software rights ownership of the Olympic Games, ISM is one of the world's leading providers of sports fantasy games, particularly specializing in the football/soccer sector. Visit the company's website at http://www.ismltd.com

Beijing 2008(TM) is being developed by Eurocom, known for their previous work on the official video games of Pirates of the Caribbean, Batman Begins and Athens 2004(TM). Eurocom was founded in 1988 and has evolved into a world leading developer of cutting-edge console games based on high profile franchises and movies. Eurocom's development team comprises of 280 highly experienced and talented staff, based in Derby in the UK. Further information on Eurocom can be found at http://www.eurocom.co.uk.
Companies: SEGA
Games: Beijing 2008