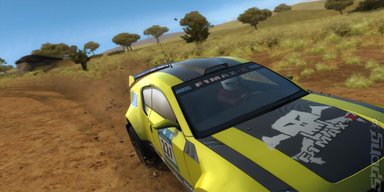 SEGA Europe Ltd. and SEGA of America, Inc. today confirmed that SEGA Rally? will include, among others, the Mitsubishi Concept-X, the recently revealed McRae Enduro, the RUF Rt 12 and a uniquely customised HUMMERŪ H3?. SEGA Rally will be released across Europe on the PLAYSTATIONŪ3 computer entertainment system, the Xbox 360? video game and entertainment system from Microsoft, the PSPŪ (PlayStationŪPortable) system and the PC on September 28th 2007.
[b]
Mitsubishi Concept-X[/b]
With a nose end inspired by a jet fighter this is the concept vehicle for the next-generation of the Lancer Evolution Series, this fantastic car makes its video game debut in SEGA Rally. The production version of the Concept-X will have a 2.0 litre turbo-charged engine, a twin-clutch transmission, a further-developed all-wheel-drive system and a lightweight all-aluminium bodywork. The words Lancer Evolution have become synonymous with the sport of rallying since the car first launched in 1992 and the Concept-X has paved the way for the release of the forthcoming Mitsubishi Lancer Evolution X in early 2008.
[b]
McRae Enduro[/b]
The brainchild of rally champion Alister McRae, the McRae Enduro is a new rally car concept that combines outstanding driving dynamics and modern turbo-diesel power with the extra traction that comes with a sophisticated suspension set-up and four-wheel-drive. The rugged McRae Enduro has been designed to compete in the most extreme off-road events including the FIA Cross-Country rallies, Baja-type events and the gruelling Dakar Rally. Having first met with the SEGA Racing Studio early in development of SEGA Rally the relationship was made stronger when SEGA Racing Studio?s Lead Car Artist, Keith Burden, became involved in the design process of the McRae Enduro, offering his skills and advice on the look and shape of the McRae Enduro. The McRae Enduro also makes its video game debut in SEGA Rally.
[b]
RUF Rt 12[/b]
RUF Automobile GmbH is the producer of high-performance vehicles, specialising in the manufacturing and enhancement of existing sports cars to RUF performance specifications. The RUF Rt 12, available to purchase with either a four or rear-wheel drive train has advanced aerodynamics and handling characteristics. It is one of the fastest and most desirable SEGA Rally cars boasting a top speed of over 200mph.

HUMMER H3 SUV (Customised)*
You wont find this beast of a car in any other game because it?s been modified, with approval by GM, by Lead Car Artist at the SEGA Racing Studio, Keith Burden. HUMMER is one of the very few manufacturers to allow such extensive customisation for a game and Keith has pulled out the stops to produce a real monster for SEGA Rally. Beginning as a standard HUMMER H3 SUV, Keith removed the rear doors and dropped the ride height, brought the wheel arch up a touch and tweaked it further to allow more space for wheel clearance. Keith then added Rally-Raid influenced wheels and tyres. The H3 is currently the most popular HUMMER model, with its compact design making it especially desirable within the American market.

SEGA Rally for the PS3, Xbox 360, PSP and PC will be available across Europe on September 28th 2007.
Companies: SEGA
Games: SEGA Rally