The most realistic tennis game just got better! 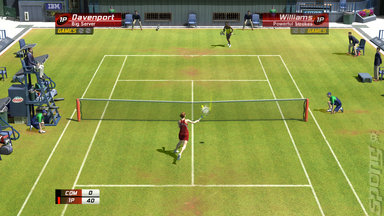 LONDON & SAN FRANCISCO (February 6th, 2007) ? SEGAŪ Europe Ltd. And SEGAŪ of America, Inc. today announced that Virtua Tennis 3 on the Xbox 360? video game and entertainment system from Microsoft will, for the first time in franchise history, allow players to compete with gamers around the world in Ranked and Player Modes for top scores on the Leaderboard on the Xbox Live. Virtua Tennis 3 will also support stunning 1080p graphics and a brand new VT:TV live spectator mode when the game launches.

For the first time, Xbox 360 gamers can experience high-definition 1080p graphics on their console with Virtua Tennis 3. With the highest digital video standard enabled on the Xbox 360, each of the 20 tennis pros featured in Virtua Tennis 3 appear even more realistic, while the court environments deliver a newfound richness in colour and texture. The increased levels of detail can be picked out in the spectators and backgrounds, and despite the increased number of pixels on screen, the smooth gameplay mechanics and movements of the players are just as fluid as ever.

The online gameplay for Virtua Tennis 3 consist of a number of features set to make the most of the Xbox Live network. Players can take part in Ranked or Friendly modes, and enter Exhibition games or Tournaments in both singles and doubles matches across the Live network. The all new VT:TV real-time spectator mode allows players to view their friends or other top-ranked players compete in tournaments, adding an all new strategy in sizing up the next opponent.

?Virtua Tennis 3 on Xbox 360 is definitely the next generation of tennis? commented Matt Woodley, Creative Director of SEGA. ?We?re striving to create games which not only have great gameplay but also can make the very most of the Xbox 360?s amazing technology.?

?We?re thrilled to be able to say that Virtua Tennis 3 will be coming to Xbox 360, showcasing an online experience with Xbox Live that you won?t find on any other systems and spectacular 1080p graphics,? said George Peckham, general manager, global third party publishing for the Interactive Entertainment Business, Microsoft. ?Fun and easy to pick up and play, Sega is hitting another ace with Virtua Tennis 3.?