Push your racing skills to the limit with different challenge events; see the World Challenge tests in the new video at www.codemasters.co.uk/toca3psp 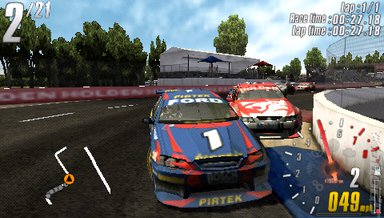 Thursday, 1st February (10am UK time) - Take motorsport racing out on the streets (or anywhere you want) as Codemasters confirms that TOCA Race Driver 3 Challenge, the exclusive PSP™ edition in the top racing series, will launch on February 16th. Jump in to the driver's seat right now and see the thrill ride that awaits with the new video preview, available online at www.codemasters.co.uk/toca3psp

TOCA Race Driver 3 Challenge delivers an incredibly diverse range of insanely fast championships and skill-based challenges in short bursts of play, making it perfect for PSP gaming on the go. There's also incredible wireless multiplayer racing for up to a staggering 12 players simultaneously and Game Share enables up to four players to enjoy wireless multiplayer racing from just one UMD.

Presenting the world's most powerful cars in tightly fought pack racing action, TOCA Race Driver 3 Challenge comes loaded with an all-new championship structure - the World Challenge. Forming the heart of the game, the new World Challenge mode is all about perfecting your racing expertise and then proving it on the circuits. Taking players through five international championship tiers, you'll be competing in skill tests, specialised events and race championships that span different racing styles.

Varied skill tests will sharpen players' racing prowess and car-handling expertise in areas such as damage control, using the racing line, manoeuvring, timely pit-stops and pulling stunts. Challenges include 'Bring It Home', where players take control of a heavily damaged car in a race that only has a few laps until the finish. On the flip side, the 'No Damage' race sees players competing alongside aggressive opponents with the objective of finishing the race with as little damage as possible.

The 'Steering Control' event has drivers manoeuvring through a slalom course of cones within a specified time limit and measures both accuracy and speed. In a 'Drive the Line' event, the perfect racing line is shown on the track and players must stick to it for an entire lap. 'Duel' puts players head-to-head racing against one rival who has the advantage of a head start. Players must use their best racing manoeuvres to close in and overtake them for more than five seconds to win the race, all without causing any damage to the opponent's car while overtaking.

TOCA Race Driver 3 Challenge features 36 world-famous tracks, each with multiple variations of routes and over 40 of the world's most exciting real competition cars, both modern and historic and each with their own handling characteristics.