Knights of the Nine? for Windows

New faction and quests available at retail on November 23rd. 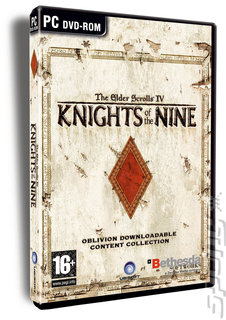 LONDON, UNITED KINGDOM - October 18 ? Bethesda Softworks® and Ubisoft, one of the world?s largest video game publisher today announced plans to make Knights of the Nine? content for The Elder Scrolls IV®: Oblivion? available for the PC on November 23rd for EMEA territories.

Knights of the Nine is a compilation that will include all the other Oblivion downloadable content released to date: Horse Armor, The Orrery, Wizard?s Tower, Vile Lair, Thieves Den, Mehrunes? Razor, and Spell Tomes.

Knights of the Nine features an all-new faction and quests for noble characters and answers many of the questions surrounding the Ayleid ruins found throughout Oblivion. Players can join a new faction and found their own order of holy knights ? leading them into battle against a sorcerer-king and his demonic minions while exploring massive dungeons and searching for legendary relics ? the holy armor and weapons of the Divine Crusader.

Released in March 2006 for the Xbox 360? videogame and entertainment system from Microsoft and Windows, Oblivion is currently the highest rated game available for the Xbox 360 according to MetaCritic.com and GameRankings.com. The game has won countless awards and accolades to-date including G4?s ?Best Game of 2006? and the #1 ranking on PC Gamer?s (UK) list of the top 100 games of all time.

In addition, Bethesda Softworks and Ubisoft announced in September that Oblivion will be coming to the PLAYSTATION®3 computer entertainment system for EMEA, and that a version for the PSP® (PlayStation®Portable) system is also in development for release next year. The Playstation®3 title will contain the Knights of the Nine content.
Companies: Bethesda Ubisoft
Games: The Elder Scrolls IV: Knights of the Nine