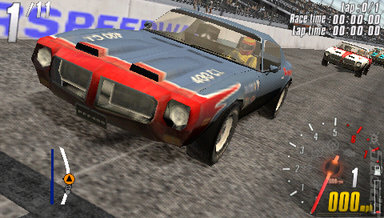 Prepare for an all-new tarmac-tearing TOCA experience as Codemasters announces TOCA Race Driver 3 Challenge, an original title in the thrilling motorsport series, coming this winter for the PSPģ (PlayStationģPortable) system.

Set to launch exclusively in PAL territories, TOCA Race Driver 3 Challenge is being designed from the ground up for PSP gaming with an emphasis on burst play and will deliver all the motorsport excitement the series is renowned for.

TOCA Race Driver 3 Challenge will roar in with a cavalcade of officially licensed racecars, world-famous tracks and a new, progressive central game mode Ė the World Challenge. As the piston-pumping heart of the game, the World Challenge will see players competing through a series of international championship tiers, each packed with skill tests, specialised events and championships that span different racing styles.

Each World Challenge tier is designed to enhance and expand your race driving skills and experience. First, a series of tests and events will build your racing prowess in areas such as damage control, using the racing line, manoeuvring, timely pit stops and braking accuracy. Now youíre ready for the main event: the tierís specialist Championship season with a series of closely-fought multiple car races on different circuits. Come first overall in the championship and youíll move up to compete in the next tier of the World Challenge.

Throughout TOCA Race Driver 3 Challenge, youíll be racing the world as each tier has its own international location and theme: from the British GP, to the heavyweight touring cars of Australiaís V8 Supercars and Germanyís DTM events, through to American Race series across the USA and then to a global Masters championship tier where youíll compete against the best of the best.

Of course, with all this competitive racing, TOCA Race Driver 3 Challenge features spectacular collisions thanks to its realistic damage system; sparks fly when you bottom out, smoke billows from tyres, doors flap, windscreens shatter, wings get ripped off, spoilers break and fly from the car and bodywork realistically deforms with every impact.

In addition to the World Challenge, TOCA Race Driver 3 Challenge will come loaded with additional play modes including Free Race and Time Trial. Thereís also wireless WLAN multiplayer action play for up to a staggering 12 players simultaneously and further multiplayer action via Game Share, enabling up to four players to enjoy fantastic WLAN racing from just one UMD.

Set to be the handheldís most thrilling, multi-event, motorsport title, TOCA Race Driver 3 Challenge will get PSP playersí engines roaring this winter. Be the first off the grid online at www.codemasters.co.uk/toca3psp