Buy them, train them, pick them? then turn them loose on your rivals! 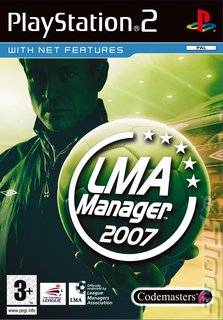 At the start of a new season, all things are possible. This year could be your club?s year. Promotion, a good cup run, the Champions League? football fans everywhere are dreaming already. But why just dream? Make it happen with LMA Manager 2007. Buy the players YOU think your club needs this summer.

The market-leading football management title is on its way back and this time it?s going next-gen. LMA Manager 2007 will launch for the Xbox 360? (hard drive not required) and PC on September 22nd. A comprehensively updated PlayStation 2 edition will launch simultaneously. Catch the new video at www.codemasters.co.uk/lma2007 now (in Downloads).

BUY THEM!
It?s the core element of any football management game and LMA Manager 2007 has the most realistic player transfer system in its history. With all-new transfer A.I. creating more realistic contract negotiations, you?ll experience greater personality from individual managers and even more advanced decision-making from the players.

Go deeper into negotiations with contract clauses, staggered payment options, player-swap deals, and transfers in advance. Sign the players the managers should be chasing in the real world!

TRAIN THEM!
Now you have the squad of your dreams (or just making do with the squad of your nightmares), get them into shape in the fully updated and refined training section. See those risky new tactics played out before the big game in the Training Match, where your tactical experimentation comes to life in 3D, rather than as a page of numbers on yet another spreadsheet.

Improve the results of your training sessions by building a more advanced training ground and admire your new facilities in glorious 3D. An in-depth Training Report provides details on all of your players, including your youth team, enabling you to identify your players' preferred tactics and discover hidden player attributes.

PICK THEM!
With your players signed and trained, it?s time to choose the right players and the right formation for your assault on league and cup success. LMA Manager 2007 offers you complete control over the positioning and focus of every player in your squad.

There?s also a huge array of pre-set formations and tactics to select from. Have your team play in the style of a number of successful international and club teams of the past. Killer formations such as Brazil 1970, Italy 1982, France 1998, Ajax 1995, and Manchester United 1999 are all at your fingertips.

It?s not all glamour in the lower leagues. You can forget The Beautiful Game, and get stuck in and play like Wimbledon did in the 1980s or Jack Charlton?s Republic of Ireland side from Italy 1990 ? the range of preset tactics includes more direct formations too.

THEN TURN THEM LOOSE ON YOUR RIVALS!
Send your players out onto the pitch on match day and see them fly into challenges and rifle home screamers with the next generation of LMA Manager?s acclaimed 3D Match. A new animation system delivers more fluid realistic actions and more emotion ? shouting, frustration, jostling, gesturing ? that brings players to life. Star players have individual skills and ?showboat? style tricks such as overhead kicks, spins, turns, and 360-degree pirouettes.

Take charge from the dugout and lead the team to the field with your own personalized manager. In LMA Manager 2007, the series? trademark Dugout Shouts feature is more effective than ever. You can yell formation and tactical changes to your team straight from the touchline and see the instant effect ? there?s no need to pause and drop into any menus in LMA! If you see your centre back dawdling in your box with a striker closing down on him then a quick shout of ?Clearance!? will soon see the ball leaving the area.

Set to bring you the most realistic and exciting football management experience yet, LMA Manager 2007 will launch for Xbox 360 and PC on September 22nd, alongside the extensively-reworked PlayStation 2 edition. Watch the new video online at the game?s new website, www.codemasters.co.uk/lma2007 and on the ever-busy forums at www.lmaforum.com