The Hustle: Detroit Streets - Pool on the PSP. 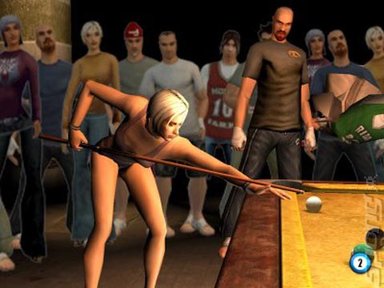 Tuesday 15th August, Basingstoke UK/? Deep Silver today announced something radically different to the slew of triple-A PC titles it?s releasing this year ? The Hustle: Detroit Streets is a pool game with a difference, exclusively for Sony PSP, and distributed in the UK by Koch Media in early October 2006.

The Hustle: Detroit Streets lets players take on the role of either Jack Stone or Kat Hudson as they make their way through the pool halls and clubs of Detroit. Players hone their pool skills and work their way to the top of the pool circuit through two different game modes - story mode, playing as either Jack or Kat in their quest for respect and cash, or single games, where they can practice their skills by playing one-off matches against AI opponents. Full Wi-Fi multiplayer is also supported.

Both modes feature a number of trick shots and challenges, which allow players to earn prize money, face off against other players and buy new items such as clothes and cues at local shops. Players make their money gambling on their own matches, hustling, betting on shots (spot betting) and other pool matches. As players progress through the game and meet certain criteria, they?ll discover different gameplay modes and items. Challenges, new venues, different clothes and characters unique to each venue become available as players climb their way to the top of their game in this accurate recreation of pool.