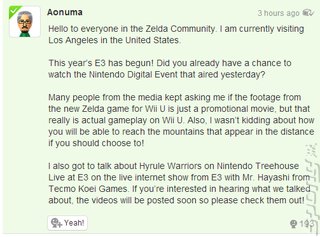 Nintendo may not technically have been at E3 2014 with anything to show off, it did so via a video broadcast and that included an amazing vision of the new Zelda game on the Wii U. It really is fabulous as you can see below. So fabulous it surely could not be anything other than pre-rendered. Wrong.

The game's director Eiji Aonuma posted an illuminating note into the Miiverse post in which he stated: "Many people from the media kept asking me if the footage from the new Zelda game for Wii U is just a promotional movie, but that really is actual gameplay on Wii U."

He also said that, "Also, I wasn't kidding about how you will be able to reach the mountains that appear in the distance if you should choose to..."

Well spotted by Gengame
Companies: Nintendo
Games: The Legend of Zelda: Breath of the Wild