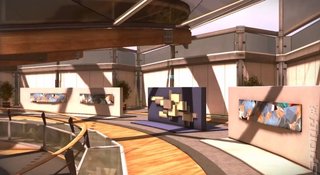 Ghost Recon Phantoms as a new level. It's called The Gallery but don't expect boring art and all that guff, expect shooting and grenades and death dealing. Sort of like a Tracey Emin piece.

?This new map is set in a circular museum inspired by the Guggenheim in New York. The difference is a double-helix staircase, similar to the Bramante Staircase in the Vatican Museum. To boost the level of challenge in The Gallery, there is only one point to capture, located at the top of the map, so both teams have to make their way to the top using one of the two paths. The Gallery was designed to have very little room to hide, making the map both tactical and fast-paced,? explained Simon Davis, Lead Designer on Ghost Recon Phantoms." Now watch the movie.