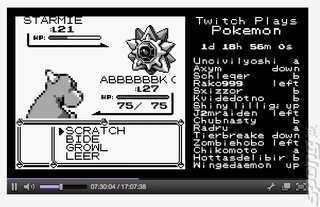 Millions and millions of people have been using Twitch TV to watch other people attempt to play Pokemon Red/Blue in what is being called a 'social experiment' but which looks instead like a hugely interesting PR coup for Twitch.

You can get involved via the link below. However, here's what Twitch says: "TwitchPlaysPokemon is a social experiment, it is a stream of the Gameboy version of Pokemon Red (151 romhack) running on an emulator. An IRC bot translates buttons said in chat into keypresses (simulated in software, no fancy typist robots)."

Playing the game is simple: "Say the button you want pushed in chat (a, b, start select, up, down, left, right), please be aware that there is considerable input lag (see below) and will take awhile before your inputs are registered. Only one button per message is accepted, there's no combos or holds."