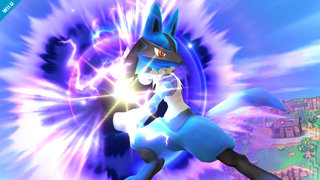 Did any of you guys play Super Smash Bros. Brawl? You did?! Well that makes our job easier, as you'll already know (we hope) that the dog-like Pokémon Lucario was available as an unlockable character, right?

Jolly good, you'll know that it was most famous for its knock out Aura attacks too, won't you? Well, we guess you'll be pretty happy to hear that Lucario will feature in this year's Super Smash Bros. which is set for release on Wii U and 3DS - neat!

Oh, and is if that isn't enough Super Smash Bros. related fun for today, why don't you head over to our game page for screens and more info? God we're good to you.
Companies: Nintendo
Games: Super Smash Bros.