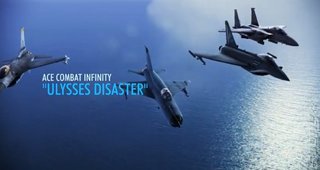 Ace Combat Infinity has been shown off over in Tokyo this week and we've only got a copy of the latest trailer for you to have a bloody good look at!

Namco Bandai has the following to say about the new footage called 'Ulysses Disaster': "Ulysses fall on earth in 1994 destroyed 20% of its surface. Countries started to fight over the few resources left, creating many refugees. A specific district near southern Russia was set for the place to take in these refugees...

Set 20 years after the disaster, you are a new pilot in a mercenary company on the United Nations Forces side.

Set in a precise near future world and including beloved elements like super weapons and hyper-real visuals, the game will offer a brand new story campaign and exclusive and innovative Online Cooperative mode.