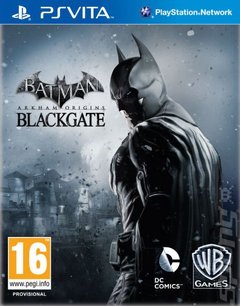 So, we've seen a fair amount of Batman: Arkham Origins since its announcement, but a fair bit less of its handheld counterpart, Arkham Origins Blackgate.

Well, here it is. Complete with a bunch of motion-comics-style almost-animation. Motion comics is when someone takes a comic image and sort of wiggles it about a bit to make it look like it's moving, producing an effect not dissimilar to the cheapest of early action/adventure cartoons. The stuff in this one looks like it's aping popular comics artist Jock, which is nice.