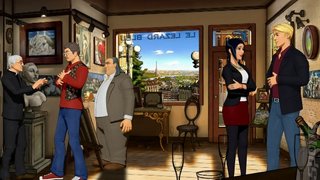 The headline says it all - Broken Sword: The Serpent's Curse will be the first adventure in the series for six years.

The Vita release which is due this year marks the first Broken Sword title to be released for a Sony handheld. The title will also be released on Windows PC, Mac, Linux, iOS and Android.

We'll have more as it unfolds, but for now, why not check out the game page?
Companies: Revolution
Games: Broken Sword 5: The Serpent's Curse